Acting out the gospel

The Mark Drama has a simple premise—to take the Gospel of Mark and turn it into theatre with evangelistic intent. Checkpoint approached CMS missionaries from Europe, East Asia and South America and asked them to talk about their experiences in ‘acting out the gospel’. Naomi Brunacci, Italy CMS missionary Naomi Brunacci has worked alongside students […]

CMS Director of Training and Development David Williams (with his wife, Rachel) works with the teaching team at the CMS training facility, St Andrew’s Hall, to prepare potential missionaries for service in many locations. He explains why solid preparation is necessary for new missionaries starting out in cross-cultural ministry. Some people think being a missionary […]

Simon and Jessica Cowell arrived in Siena, Italy at the beginning of 2017 for their first term as CMS missionaries. While they have focused on learning and improving their Italian in this first year, they have discovered that language learning is also a ministry, providing them with opportunities to share the gospel with their classmates.

Missionary Spotlight: Who has God placed in your life?

As part of thinking about our ministry to half the world’s population, Checkpoint asked two female missionaries to tell us about someone who has influenced them in their walk as a Christian and missionary.

CMS missionary Gillian Law is serving in Italy and reflects here on why she became involved in student ministry. 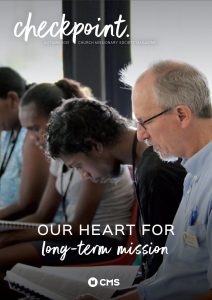