A Life Uncommon; Ken Perry; Self-published, 2011. Ken and Jay Perry served with CMS in Borneo from 1955 to 1959, then Singapore and Klang between 1960 and 1965. On their return to Australia Ken was appointed Victorian General Secretary of CMS from 1965-1972. After a period of parish work in Melbourne and its surrounding districts, […]

Shoot Me First; Grant Lock; Broad Continent Publishing, Melbourne, 2011 When you start reading this book, you’ll wonder if the word ‘Biography’ on the back cover is a mistake. Abductions, blood feuds, suicide bomb attacks, a woman married to a warlord by force, a baby daughter sold in a bazaar … you could be forgiven […]

Munguishi Weavings: Tales of a Term in Tanzania—Lynne Clarke Checkpoint Summer 2009–2010 features a little of Lynne Clarke’s amazing story: flicking through a CMS Victoria newsletter, she came across an ad for a short-term teacher at Munguishi Bible College in north east Tanzania. Before she knew it, she was off on the adventure of a […] 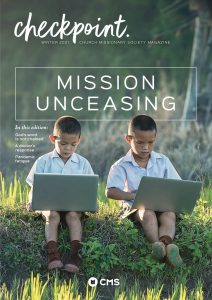