CMS missionaries Ian and Narelle Hadfield serve at St George’s, a large international church in Singapore. Ian describes how, despite COVID restrictions prohibiting many in-person ministries, God’s word continued to go out.   Paul’s instruction to Timothy to “preach the word in season and out of season” was the foundation of our approach to the […]

From idol worship to inexpressible freedom

CMS missionaries, Ian and Narelle Hadfield, shared the story of Lin Lin, who had a dramatic conversion after attending their church in Hong Kong. CMS interviewed Sok Han, one of the ministers at St Andrew’s, to learn more. Story by Amanda Jeavons

On 14 January, Jakarta was rocked by news of a horrific terrorist attack. At the popular Sarinah mall, bombs were detonated and snipers shot into the crowds. Islamic State (IS) quickly claimed responsibility for the attack. Thankfully all CMS personnel in Indonesia were safe, but a member of All Saints Jakarta, where CMS worker Ian Hadfield is the Vicar, was seriously injured… 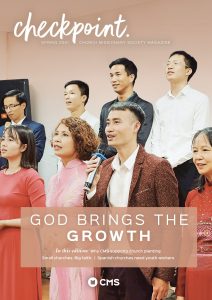