Developing a global perspective requires that we listen to and learn from one another in the increasingly inter-connected body of Christ, writes David Williams, CMS Development and Training Secretary.

Arthur and Tamie Davis (with Elliot) have been serving in Dodoma, working at St John’s University of Tanzania. At SJUT, Arthur and Tamie partnered with student leaders in the Christian group to pursue unity in Christ and a faith that shapes life far beyond university. Now, Arthur and Tamie are preparing to move to Dar es Salaam to take up a role with TAFES, the Tanzanian Christian student movement, which will allow them to work with students across many different campuses. They share more about their decision here.

Getting ready to go

Graham and Wendy Toulmin are new CMS missionaries. They will be serving in DR Congo, where Graham will be running a dental training school. They shared this update about preparing for work in DR Congo.

A former CMS missionary couple, Russell and Kay Clark, have been honoured in the Queen’s Birthday Honours List, for their years of service to medicine and the church. 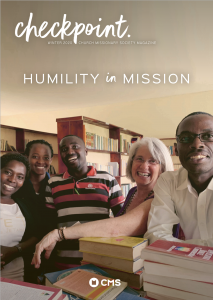