We’re excited to announce that James & Rachelle Foley, with Xavier and Rupert, were accepted last week as Missionaries-in-Training with CMS Australia. They will be training at St Andrew’s Hall in Melbourne in Semester 1 2020 with the view to being sent to serve in theological education in Latin America in 2021. 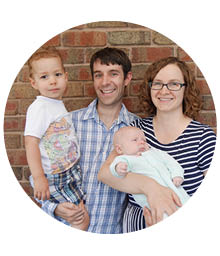 James & Rachelle are Adelaideans who both attended Adelaide Uni. James studied Mathematics & Computer Science and Rachelle studied a Bachelor of Science majoring in Psychology and Microbiology. Throughout their uni days, both James & Rachelle were involved in the North Terrace Evangelical Students (ES) Ministry. A couple of years after graduating from uni, James served as a ministry apprentice at his local church and with ES. From 2013–2016, both James & Rachelle attended Moore Theological College in Sydney. During their study, James was the student minister at Burwood Baptist Church and Narwee Baptist Church. Upon their return to Adelaide, James has worked for Enfield Baptist Church and as a staff worker for AFES at the Mawson Lakes campus. Rachelle has been involved in Enfield’s playgroup and leading a mother’s Bible study group, while focusing on their two delightful boys, Xavier (3 yrs) and Rupert (10 months).

Both James & Rachelle have displayed their desire to serve God with their whole lives and especially to serve in a gospel resource-poor culture. We’re looking forward to seeing how God will use both James & Rachelle to train others to go deeper into God’s word in Latin America.

Please join us in giving thanks to God for raising up James & Rachelle as workers for the Lord’s harvest. James & Rachelle are delighted to be accepted as MiTs and would love to invite the CMS SANT Branch to join with them in rejoicing too. We look forward to sharing more news about James & Rachelle’s future ministry over the next few months and at the CMS Summer Conference 2020.