David Williams is the Director of Training and Development at St Andrew’s Hall in Melbourne, where all CMS missionaries receive special training in mission and culture. Here he talks about the role that Bible storytelling can play in breaking through to those who are closed to the gospel.

A friend volunteered to help with an international student ministry in Melbourne. She was nervous about serving in a role that was outside of her experience. With a degree of trepidation, she arrived for the first time. As she walked through the door, a young student approached her. “Are you a Christian?” the student asked. “Good, then please tell me about Jesus and how I can become a Christian too.”

Sometimes Christian ministry is easy, as my friend discovered. Sometimes people are open to the gospel. It was easy for my friend to read the Bible with this student and introduce her to the Lord Jesus.

When people are closed to the Bible

In many parts of the world, including much of secular Australia, Christian ministry is not so easy. People are often closed to hearing about Jesus and the Christian faith. A person is closed when they are sure they don’t want to become a Christian, and don’t want to know anything about the Bible.

They might be closed because they are already committed to a worldview that precludes belief in the Lord Jesus. Perhaps they are committed Muslims, Hindus or Buddhists. They have a well-formed belief system that has closed out the possibility of following Jesus as Lord and Saviour. They might be closed because their belief system has convinced them the Bible is coercive or oppressive. Perhaps they have a family member who has been abused by the church. In many faculties of Australian universities, staff and students might be closed because they think that metanarratives (overarching stories that give meaning to a culture) are fundamentally untrustworthy and destructive, especially the Christian metanarrative. If you approach someone who is closed and ask them if they want to study the Bible with you, they will simply say “no.”

How will they hear? 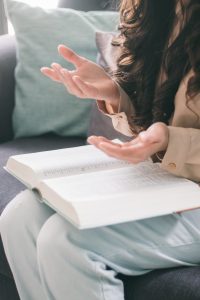 But how will people ever hear God’s word if they are closed; if they are certain that the Bible has nothing to say to them and they hope never to read it?

Os Guiness describes a range of strategies that we can use to reach people who are closed.[1] His strategies include using questions, stories and drama. These approaches engage people’s imaginations and emotions. Although he calls them subversive strategies this does not mean that they are deceitful. Rather, the aim is to subvert a closed worldview, not by crashing into it head-on but by questioning its assumptions.

Bible storytelling ties a number of these strategies together. It enables us to bring people’s imaginations and emotions into contact with God’s revelation of himself in his word.

The value of storytelling

If we compare Bible storytelling with Bible translation, then Bible storytelling is a little bit like a ‘dynamic equivalence’ Bible translation where the relationship between text and translation is somewhat looser and less ‘literal’ (one example of this might be the New Living Translation, as compared to the ESV). Or if we compare Bible storytelling with preaching, it is like taking a Bible story and making it accessible and immediate for people. John Chapman used to do this all the time—his re-telling of the story of the Rich Fool (Luke 12) was electrifying. When ‘Chappo’ (as he was affectionately known) told it, the rich fool was congratulating himself for his great wealth when suddenly “there was a searing pain in his chest, and he was dead before they got him to intensive care.”

Bible storytelling brings together several of Os Guiness’s strategies for reaching people who are closed to the gospel. Imagine a gospel worker chatting with a Muslim friend. The friend has recently had a baby and is lamenting that she is considered unclean for forty days after the birth. The gospel worker might say, “That sounds really hard. Can I share a story that Jesus told?” At worst, the Muslim friend can simply say “I’d rather you didn’t.” Or she might agree to hear a story, perhaps from Mark 5 (the story of the ‘unclean’ woman with the flow of blood whom Jesus heals) or John 4 (the shunned woman of Samaria who is accepted by Jesus). After telling the story, the gospel worker might move on to different areas of conversation, leaving the mustard seed of God’s word to do its work. Or she might ask, “What did you like about that story?” and see how the conversation develops.

Telling Bible stories in this kind of way brings the narrative and the drama of Scripture into people’s lives. It opens the possibility of asking and answering questions. It often leaves the door open to telling more gospel stories in the future.

From closed to open

All human beings live in a story. We create purpose and direction for ourselves by telling ourselves a story about how the world is and where we fit in it. World religions and cultures shape those stories in radically different ways, but they all tell a story. As film director Shekhar Kapur says, “we are the stories we tell ourselves.”[2]

Through Christian conversion and discipleship, God invites people to discover his big story for our world—to rewrite their story. Bible storytelling can aid this process considerably. We can use approaches that unpack a chronological set of Bible stories to help people build a biblical theology. Christine Dillon, who teaches Bible storytelling at St Andrew’s Hall, talks about a time when she had been using chronological Bible stories in Taiwan. One day she began to tell the story of the angel appearing to Mary, announcing the birth of Jesus. One of Christine’s listeners interrupted to ask: “Could this be the one who has come to crush the serpent’s head?”[3]

At St Andrew’s Hall, where CMS trains our long-term missionaries, we find that all our new trainees arrive with a wealth of experience and resources for teaching the Bible. Their toolbox of Bible teaching skills is well stocked. However, most of those resources make a massive assumption. They assume that you can sit down with someone, open the Bible with them and study it together. Our trainees don’t have so many resources at their fingertips for the times when you can’t open a Bible and read it with another person. However, in many contexts around the world, CMS missionaries work with people who are closed, not open. They have no desire to open the Bible and read it. If they are Muslims, they might think that the Bible is a corrupted and unreliable text. If they are secular Europeans, they might think the Bible is oppressive and patriarchal. But everyone loves a good story.

I wonder what you expected this article would be about when you started reading? Perhaps you have reached the end and are a little surprised. So far, I have not mentioned literacy. Bible storytelling is a powerful tool for sharing the gospel with people who cannot read or write. But it is far, far more than that. Do you also have friends who are closed to reading the Bible? Perhaps you might share a Bible story with them.

Pray that God opens the hearts of many who are closed to the gospel through skilled and truthful Bible storytelling.

[2] Kapur, Shekhar. 2009. We are the stories we tell ourselves. TEDIndia available here.