James, Amos and I were running a course at Nungalinya College on ‘Our Culture Story’ for Certificate III students. The course encourages students to reflect on their culture, broader Australian culture and, in light of that, the cultures and worlds of the Bible.

As part of the course, we were studying the book of Ruth.
It was an ideal choice: big biblical ideas about redemption and faithfulness and a tiny insight into Jesus’ family tree. At the same time, Ruth opens a unique door into Israelite family life in the time of Israel’s Judges. It makes it easy to think about the cultural life of the ancient Israelites and the life of our students—the things that seem similar and the things that seem different.

Many of the students in the course were reading Ruth for the first time. Very few had English as their first language. While the book of Ruth usually gets tackled early on in Bible translation projects, several Indigenous language Bibles don’t have it available yet. In any case, most of our students tend to discover new stories by hearing them told, rather than reading it on the page. 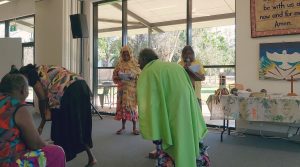 Entering into the story of Ruth

We hunted for decent videos, but most of the ones in English wanted to spice up the story or modernise it for an American audience. One video, though, was really good: a version in Kriol made by the Australian Society for Indigenous Languages (AuSIL) and people at Halls Creek. The upside was that it stuck to the Bible story. The downside was that only a third of our students spoke Kriol—although most students from the Top End could make it out.

We showed the whole Kriol video on the first day of the course, and then sections of it most days, for whatever chapter we were studying.

For each chapter, we divided the students into groups of three or four, and gave each group part of the chapter. They would read their part aloud to each other and discuss it.

Each group then shared their discoveries and told their part of the story to the rest of the class. That way, we worked our way through the book with the students telling the story to each other. Students were free to work out their own way of telling the story, and often they chose to act it out with a narrator, speeches, and improvised props and costumes.

Re-enacting Ruth chapter three led to some culturally interesting moments as students thought about what was happening on the barley heap that night. Acting the story of Ruth became so popular that when our class took their turn to run college chapel, they couldn’t resist performing dramatic moments from Ruth for the rest of the college.

Acting, telling the story, watching the video and reading aloud gave students the chance to enter and re-enter the story of Ruth from different angles and think about what the Bible was saying. By the end of the course, overwhelmingly, students talked about taking the great new story that they’d been studying home to their own churches. That was a win! We pray that these students continue to grow in knowing God from understanding the story of Ruth and how it fits in the Bible, and that they will be able to communicate these truths to their churches and communities.

There are so many ways to tell a Bible story. Contact your local CMS branch to learn of locations where you might use your storytelling abilities to overcome barriers of literacy and language.