God at work in small and big ways

CMS missionaries Josh and Susannah Apieczonek work in church and university ministries in Lyon, France. Here Josh shares how Christians throughout Europe have been helping believers in Ukraine.

While the war in Ukraine continues to horrify us, we know that God is at work. He’s working through the Ukrainian evangelical church, estimated to be 20-25% of the population—far higher than in any other European country. He’s working as refugees have spread across Europe, stretching local churches’ resources and boosting local Christians’ faith.

He is at work through Ukrainian pastors who are doing what they’ve always done—loving people indiscriminately and boldly, in word and deed, transporting them, distributing food and provisions, providing lodging, washing machines to use, and all this, in a war-torn country while their own houses are flattened.

Churches and pastors in Poland and Slovakia have been overwhelmed with refugees and have heroically shown the love of Jesus in their response. Homes have been turned into refugee welcome centres, living rooms into supply depots, bedrooms into dormitories.

Even churches in France have had a small role to play in welcoming refugees and helping the Ukrainian church. Recently I joined a group of Christians to take vehicles and supplies across Europe to Ukraine. One of our leaders was Ivan*. What follows is a part of his story.

After a rough childhood in the Donbas region of Ukraine, Ivan came to Christ during a stint in prison. For Ivan, Jesus had been a distant figure at the top of the declining Orthodox church. But then he discovered a Jesus who had given his life for him and forgiven him. Ivan became a pastor, serving his church and community—arranging the digging of wells, establishing rehabilitation centres for drug addicts, and preaching the gospel of Jesus.

He and his family arrived in Lyon three years ago, following years of persecution by pro-Russian groups. Seeing there was no Russian-speaking church in Lyon, Ivan started one which has been meeting in the same building as our church. From 20-30 people, this church has now increased to more than 100 with the influx of Ukrainian refugees. As it grew, so did the links with churches in our network, and Ivan’s relationship with an American serving here named Steve.

Steve is perpetually active and exudes a wonderful mixture of optimism and calm. He and Ivan have an incredible ability to coordinate projects, enlist people’s help and get things done. Their relationship was the catalyst for purchasing multiple vehicles and provisions and driving them to Ukraine to help the church there.

And so it was, in late April 2022, that our convoy of vans and mini-trucks set off from Lyon to drive 2,000 kms to the Polish-Ukrainian border. A church in Germany took us out to dinner and lodged us in a hotel. The next day we traversed the Czech Republic and crossed into Poland.

We reached the Polish-Ukrainian border as the sun was setting and found ourselves in a queue of cars that stretched about seven kilometres. Ukrainians who had fled the war were making their way back with cars bought from Poland, Slovakia, and Germany. The government was registering each car as it entered, meaning it could take several days to cross the border. 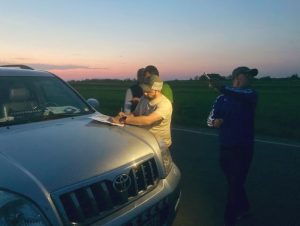 We met our Ukrainian Christian brothers and sisters and waited. It was another four hours in the dark, painstakingly filling out forms to transfer the vehicles into their names. We returned to Lyon the next day. Our faithful Ukrainian brethren spent another four days in the queue before making it back to their families and churches.

One of the drivers, a retired American pastor, prayed as we stood together—Ukrainians, French, Americans and an Australian:

“Lord, though we speak in multiple tongues and come from different lands, we are all in your family by your grace and united in your love. Thank you for Jesus, for your generosity to us. Keep our brothers and sisters safe in their journey and use these cars and provisions for your people and for your glory.”

Thank God for his work through ‘little people’ in all sorts of ways, and through his church in Ukraine – all of us united in Christ.

Give thanks for the work of Christians in France and greater Europe as they support believers in Ukraine. Pray that God will continue to be at work in this region, protecting and strengthening the faith of Christians through this tragic time.