An alphabet of ministry in the Northern Territory

In early 2021 Wayne Oldfield and Mandy Jones finished up more than a decade of service at Nungalinya College in the Northern Territory, working alongside Aboriginal Christians. In one of their final newsletters, they looked back over this time. Scroll down to see the ‘Alphabet’ of their gospel ministry in and through Nungalinya College.

We have come to the end of our work as missionaries for the gospel of Jesus through CMS.

Even though we came to this work somewhat late in our working lives (Wayne had already turned 50) it has been one of the most rewarding, stimulating and challenging periods of our lives. We want to thank churches and CMS supporters, for praying, giving and caring for us and the work in the Northern Territory among Aboriginal Christians.

It has been delightful to be part of the CMS family and we highly value their approach to world mission. The way they care for missionaries, the deep long-term partnerships formed all around the world, and the gospel priority they have is inspiring.

The CMS vision to see a world that knows Jesus is ongoing and relies, under God, on the support of many. We intend to continue in the CMS fellowship financially and by praying for our fellow workers in Australia and around the world and by attending (in person hopefully!) CMS conferences.

Ministry among Indigenous brothers and sisters

We have particularly appreciated that Christians across Australia have grown in their understanding and interest in the complex nature of ministry with our Indigenous brothers and sisters. We are convinced that partnership with Indigenous Christians and churches is vital for true healing to happen in our country. Indigenous Christians have taught us so much about patience, dependence on God and living life guided by the Holy Spirit.

We have finished our time of formal service but we want to encourage members of the CMS family everywhere to continue in support and prayer. We thought it might be helpful to provide an alphabetical summary of the ministry of Nungalinya and beyond.

This is the language we tried to learn on Groote Eylandt, when we spent five months there in 2012. We didn’t get far in learning this language but we had a good introduction to some of the complexities of community life.

B is for Ben van Gelderen,

who became principal at Nungalinya in 2019. We started at the college on the same day as Jude Long, the former principal. Jude worked hard to stabilise the college, creating a great base for Ben to build on.

C is for Churches.

Nungalinya exists to serve Indigenous churches by providing formal training and facilitating connections between Aboriginal Christians. Churches around Australia support the work of Nungalinya by donations of money and people. Thank you!

D is for Deans.

The deans help students get to college for their courses and pastorally support them while they study. Wayne enjoyed this exhausting role from 2016 – 2020.

E is for emails.

We received lots of emails and support from churches and individuals while we were up North. Thank you (and sorry for those times we didn’t get back to you).

F is for Funerals.

There are just far too many. But funerals are an important way of showing respect and passing on knowledge.

G is for Graduations.

They are a highlight of the year as students dress up in their graduation gowns and stoles and are recognised for their hard work.

H is for ‘the Haynes’

who encouraged us when we first arrived at Nungalinya. Rob and Leanna (and the Etheringtons) maintained CMS involvement in North Australia and loved and worked alongside Indigenous people for soooo long.

I is for Indigenous Assistant Teachers.

These men and women have added so much to the classes at Nungalinya. People like Yurranydjil (UCA), Marlene and Mandy M (both in the CMS Prayer Diary) teach teachers as well as students. 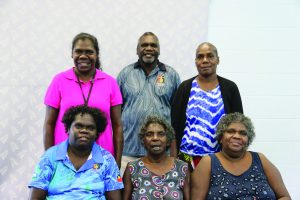 J is for James

(see the CMS Prayer Diary). He is a trainee teacher and has grown a lot through working with different teachers on different courses. He has helped us to understand more of Aboriginal culture and how some Aboriginal Christians think about spiritual things.

K is for Katherine Christian Convention.

Modelled on Keswick and Katoomba Conventions, Katherine Christian Convention (KCC) is a great time of teaching and celebration for Indigenous and non-Indigenous Christians in the Territory and beyond. Wayne was treasurer of the committee for a number of years.

L is for Lutheran and other denominations.

Nungalinya is a college jointly run by the Anglican, Uniting and Catholic churches, but students also come from many other denominations, including Lutheran. Wayne acted as dean for these students as well as the Anglican students.

of the Diocese of the Northern Territory. Wayne was a member of this committee from 2016.

N is for Nungalinya or Old Man Rock.

The Larrakia people of Darwin were instrumental in Nungalinya College getting the name of the reef off Casuarina cliffs. It was a place for teaching young men. Nungalinya is now a place of teaching Indigenous men and women from all over Australia.

O is for Overseas travel.

We didn’t do a lot of this, but we thank God for the two trips to England we were able to make during our time up north. Both of us were able to meet up with family on these trips.

P is for Phone.

A crucial tool for Wayne in the last few years has been the ’Dean Phone’. It could ring at any time. The most dreaded calls (from Mandy’s point of view) were on early Saturday morning. These calls were usually to do with transport problems and sometimes led to a couple of hours work for Wayne!

Q is for Questions.

One of the truisms of working cross-culturally is that the more you learn, the more you realise you don’t know. As we look back, we know we have learnt heaps about Aboriginal culture and life in the past 11 years but we also realise there is still so much to learn.

R is for Ruth.

Ruth Walton is Wayne’s replacement as Anglican Dean. She is supported by BCA and seems really well suited to the role. A couple from Pioneers (Dan and Carolyn Dority) have been looking after the other denominations that Wayne had under his care.

S is for St James’ Sanderson.

This was the Anglican church we loved being members of during our time in Darwin and we miss our Indigenous and non-Indigenous brothers and sisters from there.

T is for TaDs.

U is for Unit.

In 2015, when Wayne left the host role at Nungalinya we were able to move into a unit in Darwin city. We liked living at the college but we were grateful to be on call less frequently.

V is for Variety.

Both of us had variety in our roles at Nungalinya. Wayne started as a project officer, became residential services manager, then host and finally dean. Mandy taught from pre-Certificate 1 to Certificate 4 and some Cross-Cultural Awareness (CCA) seminars with Gamaritj. Being at the college for so long allowed us to see students growing. One student, Craig Rogers, who Mandy taught in Foundations was ordained Deacon last year. 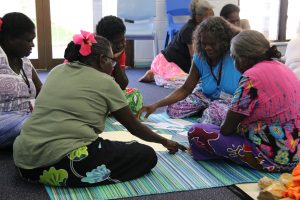 A Certificate 4 class in group discussion.

W is for What’s next?

In short, the answer is retirement (or semi-retirement), but we don’t really know what that will look like yet.

X is for All those X’s

that Mandy put in boxes for Vocational Education administration.

Y is for Yangbala Kemp.

We helped with transport for the 2011 young people’s camp outside of Ngukurr. It was a great learning time as the Berthons (former CMS missionaries) and some of the Aboriginal Christians shared with us over the week.

Z is for Zoom.

The plus side of a pandemic was the chance to connect with churches outside Darwin via Zoom and other internet platforms.

Ministry alongside our Indigenous brothers and sisters is a long-term commitment to sharing together in the grace of God. Wayne and Mandy ask that CMS supporters would continue to find ways to pray, care, give and even go to where gospel ministry such as Nungalinya College continues.