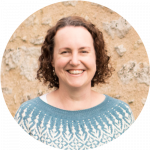 I live in Cormeilles, a centuries-old rural community that has now grown into a town of just under 25,000 people and a suburb of Paris. In 2018, our
Église Harmonie church was launched here. It became, to the best of our knowledge, the first known Bible-teaching Protestant church in Cormeilles since the
Reformation in the 16th century.

Let that sink in. In your area, how many Bible-teaching churches are there within ten minutes of your home? If you live in a rural or remote part of Australia, the trip may take longer. But Cormeilles isn’t remote. It is only 15 kilometres from the centre of Paris. From the end of my street, I can see the Eiffel Tower and La Defence (in the Paris CBD). In greater Paris, of which Cormeilles is now part, live more than 11 million people—just under half of the population of
Australia. Yet Bible-teaching churches are few and far between.

The story of our church plant

In 2015, our pastor Damien Wary returned to France from Tunisia with his young family and began the process of planting a church in Cormeilles with the French organisation ‘Perspectives’ (formerly known as France Mission).

I joined the team in 2017. Back then, most of our time was spent building relationships, understanding the needs of this community, and seeing how we could serve here. We met a handful of Christians who, until then, had been travelling a long way to go to church. We also met some people who were interested in knowing God, but were disillusioned with Catholicism. We now have a small but growing church with a children’s program and other gospel-centred activities. 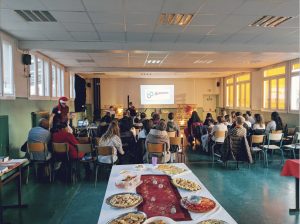 A Christmas service at Église Harmonie in Cormeilles.

Challenges overcome with your support

One of the challenges for French churches is funding for staff. The evangelical church in France is small, and most churches are only able to pay the salary of one staff member, if that. Many French pastors (including Damien) need to fund-raise to supplement their support. But most French pastors don’t know many Christians to approach for such support. Even if someone has grown up in a mission-minded church, that church is probably small, and many other gospel organisations are asking for support from Christians with limited financial resources.

By coming in with support from outside of France, I’ve been able to work alongside Damien, to support him in our new church, and to have the freedom to do that without the stress of wondering where my next pay will come from. More than simply funding, and thanks to the whole CMS community, we now enjoy a huge amount of prayer support. Previously not many within CMS had heard of Cormeilles. Now many people regularly pray for the saints here, and for the growth of the gospel. This is wonderful! 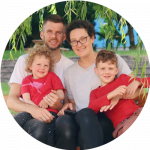 The French evangelical church is small—less than 2% of the population at best. Of the rest of the French population, it is estimated that 80% have never opened a Bible! France needs to hear of Jesus.

The National Council of Evangelicals in France (CNEF) has explicitly invited church-planting missionaries to help in this work. The CNEF vision is to plant a church in France for every 10,000 people, in order to increase the possibility of non-believers encountering Christians and so hear the gospel. Missiologist C Peter Wagner has claimed, ‘The single most effective evangelistic methodology under heaven is planting new churches.’[1]

In France, a new church is planted approximately every 11 days. Not all these churches grow to maturity, and not all these churches are effective in evangelism. But without churches being planted, many French people will be born, live and die without the opportunity of knowing Jesus.

CMS sent us to France to work with people seeking to make Christ known in this country. After a year of language school, we landed in one of the evangelical churches in Nantes, an established church of more than 100 people.

But even established churches face challenges. The church we joined had been nine years with no pastor, and several elders had burnt out. Many churches in France are struggling through a generational transition that in some cases sees them fold, unless they can be revived. In our case we became part of a team of five people intent on revival.

Our church stabilised under a new pastor over the first year, which left us with room to try something new. Having an amazing building is always a bonus, and in Nantes we have that. We have capitalised on this to create a new service that is international and bilingual French/English, to serve the large international student population and bridge the cultural taboos about going to church.

Our Australian-ness has been uniquely valuable to this project. It is not just that we can speak both languages, but we bring a different cultural element, making a truly
international church, not an American or English church. We are thrilled that two years of investment has paid off, as this service has become gradually more independent. It is also reaching French people who often have serious reservations about evangelical church culture. In our church baptisms we are predominantly seeing new French believers. 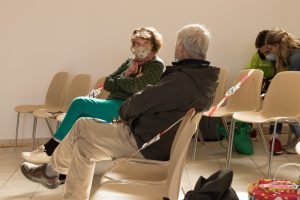 Service goes ahead despite COVID-19.

God willing, an even newer church

After being part of revitalising a church for two years, and starting a new church community, we have also started working with another church planting couple. Our plan and prayer is to start another new church in Nantes for the centre and river island. This area is chronically under-served, with no evangelical church for the approximately 60,000 people who live here.

COVID has meant that we have been slow to develop a network of relationships in this move across town. But we have had time to think, plan and pray for this new
community that God has placed on our hearts. We have been joined in that thinking and praying by our friends in Australia, for which we are so grateful. We pray that God will allow us to remain here long term, reaching unbelievers and discipling and supporting Christians.

We feel like we are torn in several directions, and our weeks now look a bit chaotic, as we continue to play key roles in the church in the north of Nantes while establishing something new in the centre. But we are also seeing God maturing us, and upskilling us, in preparation for this new task. Colin is preaching in French, I am training kids ministry leaders, and we are both involved in fruitful discipling. It is our normal Christian calling, worked out in a totally different context.

Church plants in France, by their very nature, are often underfunded and short-staffed. Giving to CMS means that CMS missionaries can humbly bring their gifts and expertise to these new and sometimes fragile ventures. Support the work here.