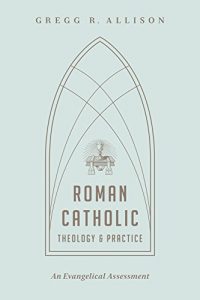 CMS missionaries Simon and Jess Cowell work alongside Italian university students in Bari, Italy. They deal regularly with questions of faith raised from a Roman Catholic perspective, and highly recommend this book for anyone with a particular interest in thoughtful critique of Catholic belief.

Evangelism to Roman Catholics. It’s a bit of an awkward topic, isn’t it? After all, in a world where so many people flat out reject the existence of God, or the reliability of the Bible, or the fundamental morality that has underpinned Western civilisation for centuries, surely in the Catholic Church we find friends and allies, rather than ‘targets’ for evangelism? Shouldn’t we be focussing on non-Christians?

But these are important questions, ones we ask ourselves regularly as we serve in Italy, a country steeped in Catholic heritage and with a Christian tradition of almost 2000 years. We ought to be asking them of ourselves in Australia, too, as nearly a quarter of Australians describe themselves as “Catholic”.1It’s why Gregg Allison has written Roman Catholic Theology and Practice: An Evangelical Assessment.  And it’s all there in the title – Allison is writing mainly for evangelical Christians to help us understand what Catholics do and believe, and whether those beliefs and practices are compatible with biblical Christianity.

The short summary is this: Allison’s work should be required reading for anyone who wants to engage deeply with Catholicism, either at a theological or a personal level, especially the first section. It’s not a light read, but neither is it incomprehensibly dense; Allison is writing for the interested, engaged lay person. It’s also not the kind of book you read cover-to-cover; each of the chapters in the first section can be read through, but the second section is much more by way of a resource to trace through the implications of Catholic theology in a particular area, and I keep coming back to it repeatedly as I serve in a majority-Catholic context.

Section one: A summary of Catholic Theology

The book is split into two sections.

First, we have a summary of how Catholic theology fits together as a coherent whole, and secondly a step-by-step analysis of the Catechism of the Catholic Church (the official Vatican summary of what the Church believes). Allison bases the first section on work by Leonardo de Chirico, a leading evangelical scholar of Catholicism, and pastor of a church in Rome who we’ve had the pleasure to meet a few times. Specifically, Allison (with de Chirico) argues that all Catholic theology and practice is based on two fundamental premises: that nature and grace are interdependent, and cooperate with one another; and that the Church is the continuation of Christ’s incarnation, his physical presence on earth.

Those two ideas in turn inform the day-to-day religious and spiritual experience of Catholic people. They also help us to appreciate how Catholicism makes sense internally – out of these assumptions arise all the classic hot-button disagreements between evangelicals and Catholics: the treatment of Mary and other saints, the nature and role of the Eucharist or Lord’s Supper, baptism, the papacy and the hierarchical priesthood, and so on. These things make sense within the framework of Catholic theology, and yet vitally, Allison shows how neither of the two fundamental Catholic premises are biblically valid or defensible. This illustrates just how far much of official Catholic teaching has strayed from the Bible, even while maintaining some Christian language.  This is very important for when we talk to Catholic friends or neighbours, because they might use the same ‘Christian’ words we do (like ‘grace’, ‘mission’, even ‘sin’), yet mean very different things by them.2

Section 2: A reference guide to the Roman Catholic Catechism

The second section is much longer, going paragraph by paragraph through the Catechism, and analysing it in the light of evangelical, Bible-centred belief and showing how specific doctrines are related to the underlying premises. This is useful more as a reference guide than something to be read through from beginning to end—both to see what the Church believes and practices in a specific area, and how an evangelical approach might affirm or challenge the Catholic view.

Allison frequently references the theological structure he outlines in the first section by way of showing how Catholic doctrine comes about and the thinking behind it rather than just responding to the presenting issue. And this is a vital insight. Allison acknowledges that ‘evangelical’ is a broad group, and evangelicalism is theologically diverse and there’s no equivalent document like the Catechism to which all evangelical churches hold. Yet he does well to find broadly accepted theological common ground without denying the variety within the evangelical fellowship. This is perhaps especially true when it comes to baptism, where there is great difference of evangelical opinion and yet by using his systematic approach Allison is able to affirm the evangelical commitment to the Scriptures, and show how the Catholic understanding is fundamentally flawed, even if there are notable outward similarities between, for example, Catholic and Anglican baptismal rites.

A book to help engage deeply with Catholicism

If you have Catholic friends, neighbours or colleagues this book will help you understand what their Church teaches them, and even amid significant disagreement suggests how we might love them and show them Jesus. My strong recommendation of the book rests on this: It helps us understand why our friends and neighbours believe what they believe, how they live out those beliefs in the everyday world, and how and where the gospel of Jesus might speak into their lives.