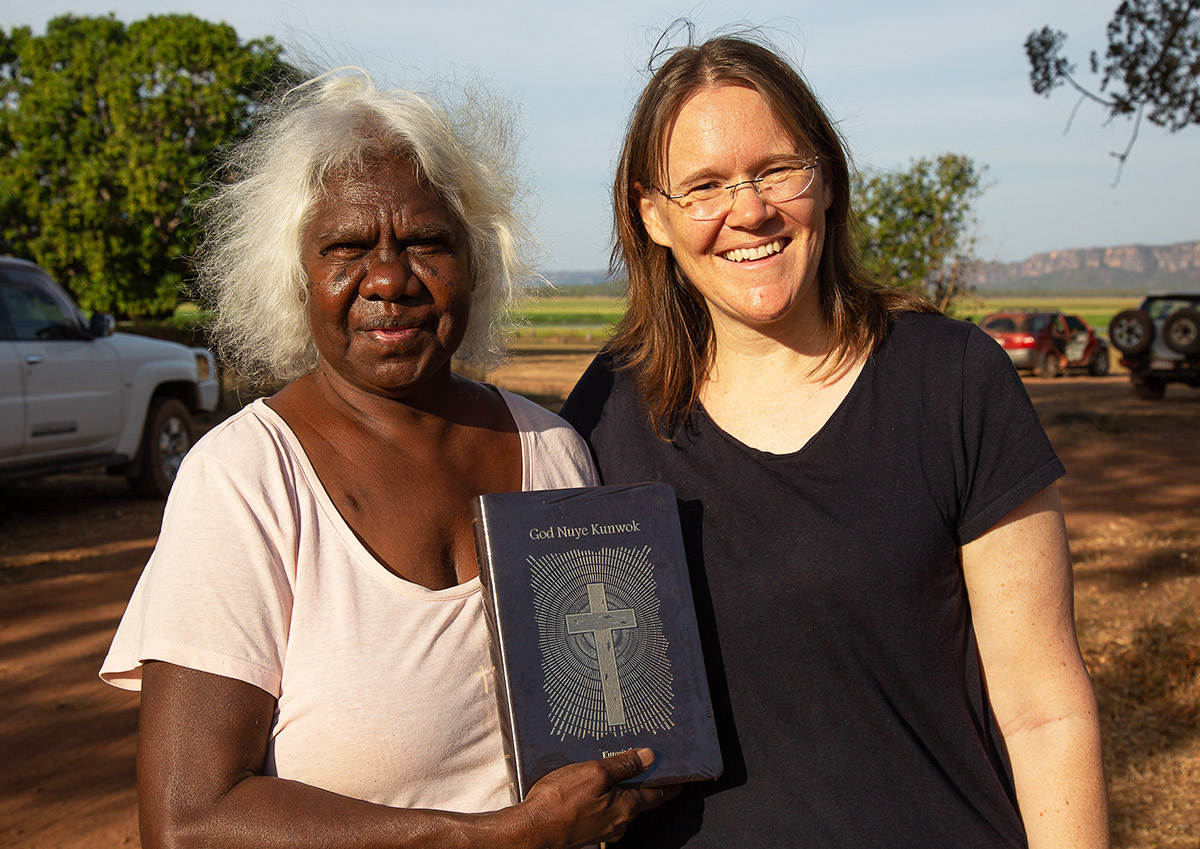 On 1 August, the Kunwinjku New Testament was officially dedicated in Gunbalanya, giving Aboriginal Kunwinjku speakers access to many books of the Bible that they have never before been able to read in their own language.

The translation has been long awaited, with many Kunwinjku Christians and CMS missionaries in Gunbalanya (also known as Oenpelli) working over a span of more than 70 years to bring the project to this stage.

The celebrations saw the local church packed out, with many people sitting outside the building and looking through the windows, according to CMS missionaries Tavis and Kate Beer, who work in partnership with the Anglican Diocese of the Northern Territory.

“Many of those present were a little emotional as the event was testimony to God’s kindness over many, many years of work by many, many different people,” they said. “The Kunwinjku-speaking Christians had prepared songs and dances, and various people shared some of their stories about what it took to translate the New Testament to this point.”

“There is celebration, thankfulness and joy from being able to hear God speak in Kunwinjku.”

One of the long-serving Kunwinjku translators on the project, Rev Lois Nadjamerrek, told the Beers that she was looking forward to seeing people “hear God speaking to them in our own language”. As a local minister, Lois will be helping people learn to read the Bible, and she spoke of plans to run Bible training events and ideas to reach Kunwinjku children with the gospel message.

New CMS missionaries Matt and Lisa Pearson have recently arrived in Gunbalanya to support Lois and other Aboriginal church leaders in this work.

“This is the next season of putting the Bible into action,” they said. “We’re here to support Lois to equip Aboriginal leaders for church and society. They long to share the Bible with the next generation.”

The Pearsons are confident that God will use the publication of the Kunwinjku New Testament to strengthen Kunwinjku Christians and raise up godly men and women to lead the church.

“Followers of Jesus will be feasting on God’s word. We have met with two small groups of people learning to read Kunwinjku already and they have a hunger to hear God speak,” they said. “There is celebration, thankfulness and joy from being able to hear God speak in Kunwinjku.”

Kunwinjku Christians at the dedication in Gunbalanya with a banner reading: “We are celebrating God’s word.”

The early days of Kunwinjku translation

The first attempt at organised Kunwinjku Bible translation was in the pre-World War 2 period, when CMS missionary Nell Harris (in Gunbalanya with her husband, Dick) translated the Gospel of Mark into Kunwinjku with the help of two Aboriginal Christians, Rachel Maralngurra and Hannah Mangiru.

The Rev Dr Arthur Capell reviewed this translation, which was published by the Bible Society in 1942. He also translated 1 John into Kunwinjku, as well as some of the psalms, the Lord’s Prayer and sections of the prayer book.

However, there was limited progress for a number of years after this, with inhibiting factors including the government language policy and the lack of language courses available for missionaries to learn Kunwinjku, according to former CMS missionary Peter Carroll, who served with his wife, Thelma, in Gunbalanya in 1967–79.

“At the time, CMS followed government policy, which encouraged the use of English. People interested in learning the language were expected to do it in their spare time,” he explained. “In 1965, CMS changed its language policy in North Australia and decided to look for a linguist to work in the Northern Territory. I was the first missionary to North Australia recruited specifically as a linguist and Bible translator.”

“Her contribution extended beyond literacy,” said Peter. “She became proficient in the language, developed excellent relations with the Kunwinjku people and became a valued translation colleague.” 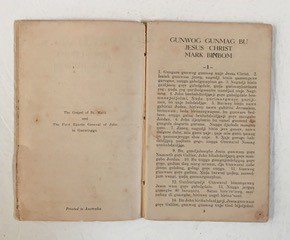 The first translation of the Bible into Kunwinjku – The Gospel of Mark and 1 John. (Photo credit: Peter Carroll)

While Rachel and Hannah continued as the two main Kunwinjku translators on the team during this time, Peter was also aided by Jacob Nayinggul, who was his main language teacher, mentor and cultural advisor, as well as Andrew Mangiru, who advised on language, cultural understanding and Kunwinjku traditions.

A New Testament for Kunwinjku speakers

The Kunwinjku spelling system developed by Peter was a significant step forward in the translation project and allowed the next generation of translators a number of years’ head start, according to Steve Etherington, who first came to Gunbalanya with his wife, Narelle, and their family in 1977.

The Etheringtons were initially employed by the government to set up a bilingual language program at the school and continued in various school roles until 1982. They returned as CMS missionaries in 1984 to join the Bible translation team and spent the next 30 years translating the New Testament into Kunwinjku, alongside many Kunwinjku Christians who worked on the project for varying lengths of time.

“When we first started the translation work, we had been praying about a group of people to work with,” said Steve. “Over the years, the Lord brought some lovely Christian Kunwinjku people into our lives. They are the ones who made the translation possible and solved the tough problems involved.”

He noted in particular Rev Lois Nadjamerrek, Ralph and Jill Nganjmirra, Dolly Maralngurra and Peterson Nganjmirra, but added that there were “many others for shorter or longer times”.

One of the hard parts for these Aboriginal translators was not necessarily how to translate a particular word or idea, according to Steve, but rather the challenge of explaining to Kunwinjku people what exactly the Bible was, and how to read and apply it.

“We all as a team learned the real spiritual battle that goes on when someone tries to make God’s written revelation accessible,” said Steve. “And there are new challenges to face now in encouraging Bible literacy and the use of the Bible in preaching and teaching.”

A Kunwinjku mini-Bible was published in 1992, including Genesis, Exodus, Ruth, Luke, Acts and Ephesians. There had been no new parts of the Bible published in Kunwinjku since then, until 2018. Now Kunwinjku speakers have access to all 27 books of the New Testament, alongside Genesis, Exodus and Ruth, while translation continues on the rest of the Old Testament.

Praise God for his living word and the work of many faithful Christians over the last 70 years to translate it into Kunwinjku. Pray for the continued translation of the Old Testament into Kunwinjku. Pray that the words of God in their heart language would strengthen and grow the faith of Kunwinjku Christians, and enable others to hear the gospel message and respond to it. Pray for wisdom, energy and faithfulness for Lois and the other Aboriginal church leaders in Gunbalanya as they use the Kunwinjku New Testament to lead their people in what is godly and true. Pray for CMS missionaries Matt and Lisa Pearson as they settle into location, learn the Kunwinjku language and culture, and support Kunwinjku Christians in their faith. 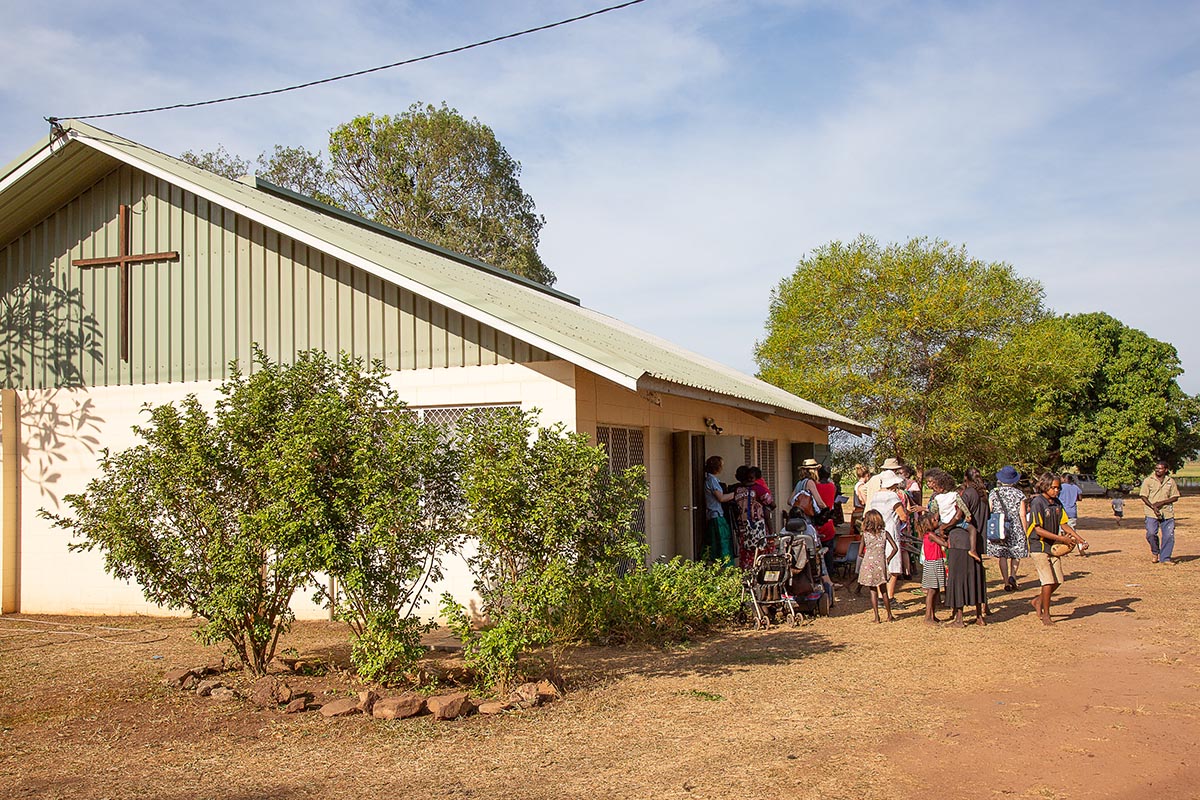 Emmanuel Church in Gunbalanya, where the dedication was held on 1 August 2018.