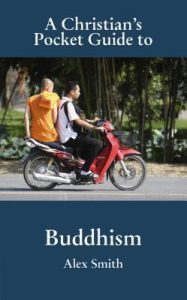 CMS missionary Wim Prins, serving in Cambodia with his wife, Maaike, and two children, has put together a list of Buddhist resources for those who want to investigate the religion and how Christians can engage with Buddhists more.

This practical booklet provides an invaluable complement to a host of theoretical books on Buddhism. It discusses folk elements (animism/primal religion) of Buddhism in Sri Lanka, Myanmar, Thailand and Cambodia. It is these elements that show what makes Buddhists tick. One third of the booklet is devoted to ministering to Buddhists in attitude, approach and arguments.

Unearthly Powers: A Christian perspective on primal and folk religions

This book is more scholarly and general in scope than Folk Buddhism in Southeast Asia, although still quite readable and practical. As in many of his other books, Burnett skilfully shares his wealth of knowledge, drawing from decades of research and missionary/teaching experience. This is essential background reading for anyone interacting with Buddhism and Buddhists.

The Spirit of Buddhism: A Christian perspective on Buddhist thought

The Spirit of Buddhism contains a wealth of information about Buddhist thought, arranged according to the various branches and regions. The strength is the compact nature of the fairly detailed survey. However, after reading the book one is still left with two questions: what is the spirit of Buddhism and isn’t it a fairly general rather than Christian perspective on Buddhism? But all in all, a recommended read. Read Craig McCorkindale’s in-depth review of The Spirit of Buddhism.

The author, John Davis, worked as a teacher and missionary in Thailand for many years. In Poles Apart, he asks a crucial question: is the gospel being presented in a way that causes the Thai people to understand it? The book’s focus is on contextualisation and effective communication, exploring methods and means that best contextualise the gospel to the people of Asia. Not for the faint-hearted.

This book is best described as an insider’s view of Buddhism by a “pioneering western Buddhist”. Though the back blurb says that the book is “eminently readable”, it is rather information-dense and theoretical. However, it largely delivers on the promise to provide “a complete summary of all the essentials of Buddhist teaching and practice”. Readers with at least some basic knowledge of Theravada Buddhism would particularly benefit from this resource. It also works well as a reference book for materials which would usually have to be looked up in multiple resources. Having said that, in order to understand Buddhist practice, one needs to consult resources on folk/primal religion as well.

A Christian’s Pocket Guide to Buddhism

The author, Alex Smith, has spent 45 years serving with OMF, including two decades among Buddhists in Thailand. While giving some essential background information about the diversity of Buddhist beliefs, in the second half of the booklet, Smith focuses on sharing the gospel with Buddhists. These 128 pages are amazing value for both the beginner and the initiated.

The Lotus and the Cross: Jesus talks with Buddha

A practical booklet by the famous apologist that describes an imaginary conversation between Jesus and the Buddha. This delightful drama brings out the claims of Christ and the Buddha, contrasting Christ’s practical compassion with the Buddha’s attitude towards suffering: “There is no way to talk about what one ought to do without showing the value of the person” (p. 72). A great starting point for a conversation with a Buddhist friend. Hard to put down!

God, Self and Salvation in a Buddhist Context

This is a challenging book about how to contextually live in missionary encounters with Buddhists. The author, Rory MacKenzie, weaves a tremendous amount of valuable personal experience into the book, drawing on time spent on the mission field in Asia and working in the UK. The guiding method is Karl Reichelt’s highly contextualised approach. Those who expect a general introduction will be disappointed, however the author’s insightful discussion of God, self and salvation is both deep and practical due to illustrations from Reichelt and MacKenzie’s own ministry methods. He goes rather far in suggesting analogies between Buddhism and Christianity, but they can help the reader form an opinion on how far biblical contextualisation can go. Read with discernment.