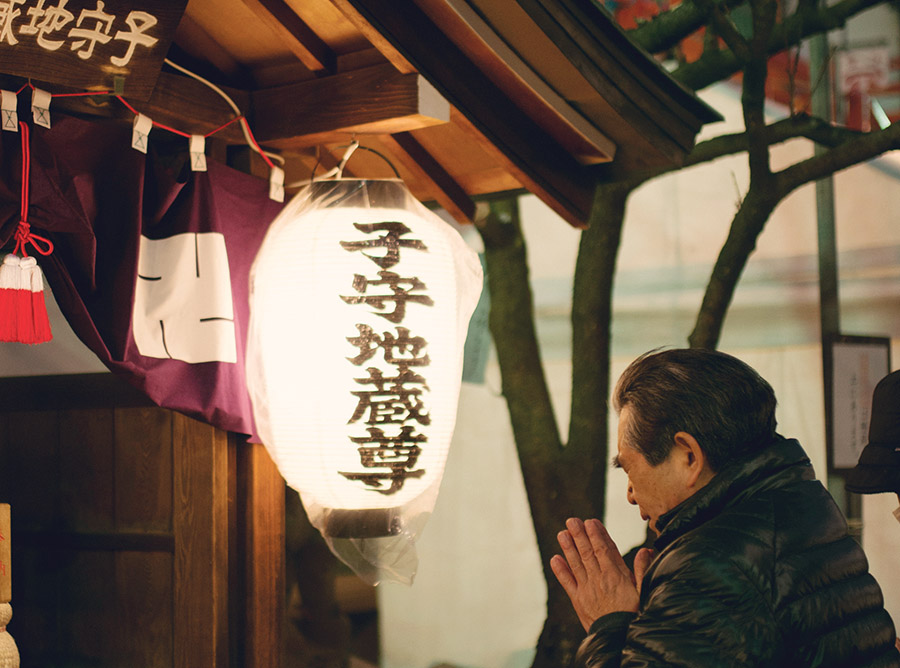 A man prays for his children at a shrine.

Untangling Japanese culture is like separating cake ingredients after baking the cake! Japanese culture is a mix of Shintoism, Buddhism, Confucianism, Christianity and Western secular philosophy, mixed by the spoon of state control and cooked in the oven of international competition. It can be hard to say which parts of Japanese life are Buddhist and which are not, and for the Christian missionary it is not always necessary to do so. However, some points can be made about the Buddhist bit.

First, Buddhism doesn’t believe in ultimate reality or objective truth. Mission work has to take this into account. You can’t expect people to be thinking in Western categories of truth, which themselves derive from the Bible. They will tend to see the gospel message as nice but lacking implications for them.

Second, Buddhism entered Japan from the sixth century on, mainly under the control of the government. Teachings which fit government agendas were favoured and remain widespread today. The basic ethical teaching of some modern Buddhist groups comes down to ‘be a good person by doing what is expected of you by society and its leaders’. They will see Christian commitment as membership in a club that has nice people in it, but doesn’t change their lives.

Third, Japanese Buddhism has been shaped by Christian teaching—perhaps more than elsewhere. Some of this dates back to Christian mission work in China in the seventh and eighth centuries AD. Many Buddhist sects today preach a variation on the doctrine of ‘salvation by faith in Buddha’. When the Roman Catholic missionary Francis Xavier arrived in Japan in the sixteenth century, he was apparently disgusted to find that Protestantism had arrived before him!

In a way, this can be a help in explaining the gospel because the idea of reliance on outside help (tariki) isn’t new to people. On the other hand, Christianity can sound like another form of Buddhism, not something that makes ultimate claim on a person’s life.

What to do in such a context? In my experience, if you are going to reshape the whole way people see reality, truth, ethics and so on, then you can’t rely on just getting them to respond to a simple gospel presentation. You have to teach the Bible systematically, as CMS is committed to doing: the first chapters of Genesis, the Old Testament presentation of the promises of God, the context and therefore meaning of Jesus’ person and work. This is the approach CMS has pursued: to keep prayerfully and relationally hammering away at systematic teaching, trusting that God’s Spirit will transform the hearts and minds of those who hear.

Soft music plays as we move to our chairs in the modern chapel. The open casket holds our friend of several decades. There is her photo on a wooden temple-shaped sculpture, with flowers and candles on either side. Above her photo is a plaque, with her new name for the coming life. Two monks take their places. One rings a bell and keeps a steady beat on a bowl-shaped gong; the other chants Buddhist sutras. It’s unlikely that anyone other than the monks understand what is being said, but it comforts the family that Gran is being sent off properly.

At the end, family and friends offer incense to the departed, who has now—so temple teaching holds—entered the priesthood in the afterlife to start Buddhist training to become a Hotoke (enlightened one). I politely refuse and offer a silent prayer to the Lord Jesus.

By population percentage, Japan is, at least nominally, perhaps the biggest Buddhist country in the world. Most Japanese have some sort of connection to a temple. Yet many don’t even realise they are Buddhist, and would be unable to say what sect their family belonged to. Christian pastor Dai Tokunaga, who ministers in Nishinomiya near Osaka, says that for most Japanese, it’s not so much about being Buddhist as it is about looking after ancestors like parents and grandparents. In Japan, this happens through the funeral rites of the Buddhist temple.

Thus the big barrier to Christian faith is not so much belief in Buddhist teaching as a sense of family obligation. “It’s more to do with ancestor worship,” says Pastor Tokunaga. Likewise, for our friend’s family, the main thing was that their grandmother was taken care of through correct funeral rites and so received the outside help, or tariki, needed to reach enlightenment.

Another pastor friend, Matsuoka Hirokazu, turned to Christ while a Buddhist monk. He says that despite divergent Buddhist teachings, most people now tend to believe that the dead will get to Gokuraku Jodo (a pure land of perfect bliss) if the funeral is done through the temple. In the Jodo shu and Jodo Shinshu sects, people get to this land by praying to the Amida, a saint who attained enlightenment but chose to stay behind to help others get there—in other words, salvation by grace! (Some argue that this reflects ancient Christian influence.) There are also continuing periodic rites to help the departed to enlightenment. Because of these obligations, discussion about Christian faith may be interesting but often won’t go far.

In this context, CMS has worked over many years to teach the gospel of salvation from the Bible, and to prayerfully build relationships where the gospel can be explained in-depth. Pray with us that Japanese people would accept Christ’s tariki alone for their salvation.

A CMS worker who was formerly in Japan recommends this YouTube video to get a sense of what Japanese people think about religion.

New CMS missionaries Matt and Jen Lim are about to move to Japan to begin language learning. Encourage them by signing up to receive their regular prayer newsletters.