Buddhism: From one man to all of Asia 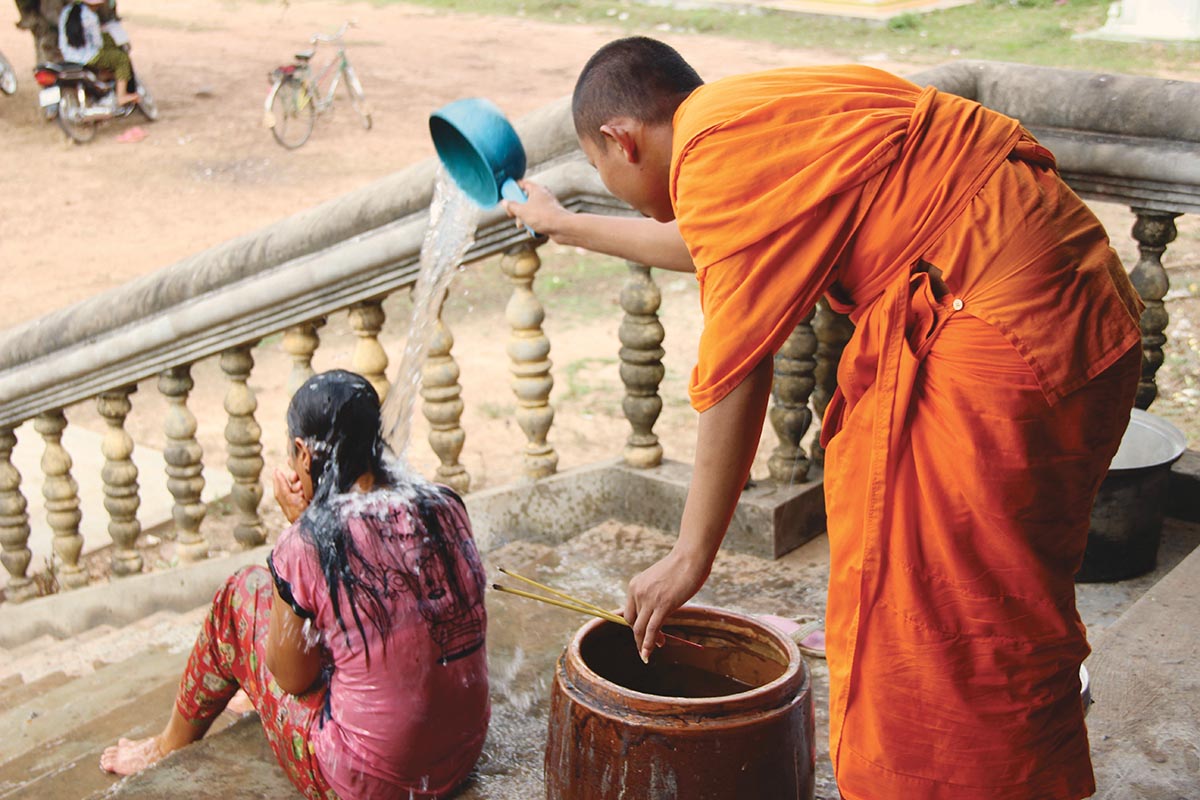 Throwing water at a ceremony which Cambodian Buddhists believe mitigates the effects of bad things that have happened or are about to happen.

CMS missionary Dave Painter (serving with his wife, Leoni) has spent nearly 20 years in Buddhist Cambodia. Here, Dave gives a quick overview of Buddhism around the world—the different strands and how we might better reach Buddhists with the gospel of Jesus.

Believe it or not, Buddhism was virtually unknown in the West 200 years ago.

But then in the nineteenth century, Oriental studies became a favourite pastime within Western academia, with lots of popular literature in this area also being eagerly devoured. So rather than being exported to the West by Buddhist missionaries, Buddhism was imported by our home-grown academics. Similarly, the revival in the study of the original Pali and Sanskrit Buddhist texts has been the work of Western academics and Christian missionaries.

In the 1950s, Zen Buddhism (a relatively minor branch of Buddhism) caught the imagination of the beatnik generation, and the book Zen and the Art of Motor Cycle Maintenance achieved cult status. From there, Buddhism was further popularised through martial arts, particularly kung fu, and spread into Western pop culture through TV, movies, cartoons and comics, such as Star Wars, Teenage Mutant Ninja Turtles, Monkey, Kung Fu Panda and The Matrix, to name just a few. Many Westerners have since sought out the teachings of Buddhist monks or lamas, so there are now many Buddhist temples in the Western world.

Like Christianity, Buddhism began with a founder. The Buddha (a title, not his name) lived and taught in north-east India around the sixth century BC. He—Siddhartha Gautama—was the son of a nobleman who, upon encountering striking examples of human suffering, renounced his life of luxury and abandoned his family, initially for the life of an ascetic searching for the meaning of life. After many years of wandering and self-deprivation, he resolved to sit under a bodhi tree and meditate until he reached his goal.

There, legend tells us, he was able to find an ‘enlightenment’ which lay not in asceticism nor in luxury, but in a ‘middle way’ which rejected the extremes of sensuality and self-torture in favour of detachment, insight and calm. From there the Buddha began a 45-year teaching ministry of bringing this enlightenment to others, converting thousands and making disciples throughout several kingdoms in northern India before dying, possibly of food poisoning, at the age of 80. Because of this impulse to teach the path of enlightenment, Buddhism follows in the footsteps of its founder and so (unlike the Hinduism from which it derives) is a missionary religion.

The title ‘Buddha’ itself comes from the ancient Pali word budh meaning to wake up, to understand, to perceive, to be enlightened. The enlightened one reaches a state of (non-)being known as nirvana. Those who follow the dharmas (Buddhist teaching) hope to find release from the endless suffering of existence, with its never-ceasing cycle of death, rebirth and new life in perpetual succession (karma).

How did Buddhism spread?

I am a missionary who has lived and worked long-term in a Buddhist country in South East Asia, so I have become accustomed to the sight of orange-clad monks walking the streets in the morning as they go about their daily collection of alms, as well as the sight of local people bending prostrate before the monks to receive their daily ‘blessing’. Our city skyline is full of the ornate roofs of Buddhist temples (called wats), and offerings are left out the front of houses and in the foyers of shops as people seek to appease the spirits of their dead ancestors. So how did Buddhism grow from just one man in north India to dominate much of Asia and beyond?

Buddhism’s early boost came in the third century BC with the conversion of King Asoka, the first king to rule most of what is now India. Asoka gave Buddhism the central place in his empire, just as Constantine did for Christianity in the Roman Empire 600 years later.

At this time, missionaries also went to Sri Lanka to spread the teaching. The type of Buddhism that later emanated from Sri Lanka is known as Theravada. It is traditionalistic in character. One of the features of Theravada is the use of the original Pali language for the study of Buddhist scriptures and monastic education, thereby internationalising Theravada, but rendering it unintelligible for the ordinary person.

Missionary monks took Theravada from Sri Lanka to Myanmar. From there it spread throughout much of South East Asia (except Vietnam) between the tenth and twelfth centuries AD, developing its own peculiarities in each place.

The other major branch of Buddhism, Mahayana, is more progressive. For example, it allows for lay people to enter nirvana and for new sacred scriptures to arise. The Mahayana tradition spread through India and was taken to China by wandering monks in around the first century AD, where it gained royal patronage—so much so that by the fifth century AD, 90 per cent of the Chinese northern capital were Mahayana Buddhist. When the Huns invaded, many refugees fled to northern Vietnam, which is why this country follows the Mahayana tradition, whereas neighbouring Cambodia is Theravada.

Theravada and Mahayana are by far the most significant strands of Buddhism. But it is also true that in different parts of South East Asia, whether Japan, Singapore or elsewhere, Buddhism has blended with elements of folk religion or other systems of thought, such as Shintoism in Japan or Taoism in China. This helps us understand why strict Theravada Buddhism is somewhat atheistic in flavour, whereas other forms of Buddhism may give recognition to the existence of spirits, demons and gods.

In addition, the types of Buddhism that have become known in the West, such as the Tibetan Tantric Buddhism popularised by the Dalai Lama, represent newer and much smaller traditions and should not be taken as universally representative (Tantric Buddhism dates to the twelfth century AD). It is not wise to generalise too quickly from one form of Buddhism to another.

Because of the complexity of Buddhism, let alone the complexity of human relationships, Christians will make mistakes when they meet Buddhists. I recall my confusion when I attended a Buddhist funeral where the amplifying speakers for those chanting Buddhist teachings were turned not towards the gathered mourners, but away! Shouldn’t the teachings be directed towards the hearers? But I later learnt that the speakers were directed outwards to ward off evil spirits that might wish to disrupt the funeral—a clear example of mixing Buddhist teaching with local superstition.

Christians will also need to understand that there is a strong focus on what is done in Buddhism (rituals, prayers, meditations, charitable works to achieve good karma) rather than on particular doctrines. Even though the path to enlightenment is through teaching, Buddhists are not inclined to debate these teachings in an attempt to prove their objective truth. Indeed, the concept of objective truth is problematic for Buddhists, anchored as it is in a gospel-centred understanding that a personal and trustworthy God undergirds the truth and reality of our existence.

For the sake of both the gospel and those trapped in the teachings of Buddhism, it is important for Christians to know the gospel and persist in relating well to Buddhist friends. We do this by praying for and loving those we meet, by asking questions and by listening carefully to the answers. Not least, we persist by being well-grounded and having a strong foundation in our own faith in Christ. CMS has committed itself to such ministry for the long-term. In this way, we will be ready to highlight the saving gospel through which the Lord Jesus provides genuine hope for release from the sufferings of this creation.

Dave Painter has more to say on the practical and occasionally difficult question of how to attend a Buddhist funeral as a Christian.

CMS missionary Craig McCorkindale says that David Burnett’s The Spirit of Buddhism: A Christian perspective on Buddhist thought is “an excellent introduction to the topic”. Read his full review here.

Heavenly Father, please bring the grace of true enlightenment to those who suffer under the false teachings of Buddhism, that they may know the free gift of the forgiveness of sins and the hope of salvation only through the death and resurrection of the Lord Jesus Christ. Amen.