Review: The Spirit of Buddhism 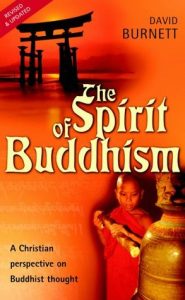 Craig McCorkindale, serving with Samantha and their three children in Cambodia, reviews The Spirit of Buddhism: A Christian perspective on Buddhist thought by David Burnett.

The Spirit of Buddhism provides as it promises: a book that goes to the heart and soul of Buddhism. This is a great introductory book for those seeking to find out more about Buddhism or a helpful resource for those wanting to dig deeper into the topic. Burnett adeptly traverses the long history of Buddhism, providing chapters beginning with summary points and ending with food for thought on how Christianity relates to or intersects with Buddhism, as well as online and offline resources.

The strength of the book lies in its comprehensiveness. Burnett surveys the beginning of the movement from its humble origins in the Buddha (Chapter 1), through to its expansion (Chapter 5) and onto its diversification (following chapters and bulk of the book), wrapping it up with the rediscovery and resurgence of Buddhism in the West (Chapter 16 and 17). Of particular interest to me was the chapter on Buddhism’s history with Christianity (Chapter 15).

Burnett’s broad sweep approach enables the reader to gain a sense of Buddhism as a whole. However, what is also required, along with an understanding of the whole, is a sense of the individual, the Buddhist himself. This latter may be more pertinent, for there are endless varieties of Buddhism manifested in individual Buddhists. Beginning with Buddhism is a great start to engaging the Buddhist, but we must make sure we move to the second. In order to meet this second goal, I offer two suggestions as complements to Burnett’s book.

The first is appreciating the individual Buddhist. Buddhism, as it can be appreciated in Burnett’s book, is substantially diverse from region to region. Burnett gives a great snapshot of the two major varieties, including chapters on the Theravada and Mahayana traditions. Of particular note, in a Cambodian context, is not only the “changing concepts of the Buddha” over time, but also the relation of spirits and animistic aspects of folk religions to the Buddhist framework (p.95). As Burnett notes, Buddhism is “not averse to religious innovation, provided it occurred within the fundamental framework of his basic philosophy of the Dharma [Buddhist scriptures]” (p.136). When it comes to Buddhism, understanding it as a whole is helpful, but getting to know the Buddhist is key, whether by looking at the regions individually or by befriending one.

Secondly, not only should we appreciate the Buddhist, but also the senses of a Buddhist. In contrast to Christianity , much of “Buddhist devotion is focused through the use of various artefacts such as images… Paying respect by act or gesture, especially prostration and chanting, are believed to give merit” (p.94). Buddhist teaching is passed down most prominently through the regular habits and practices of the family and wider society. In other words, much of Buddhist devotion is implicitly practised as a way of life rather than being explicitly understood. It may be that the way to engaging with a Buddhist is as much through a comparison of different beliefs as it is through helping the Buddhist (and yourself) to understand what lies underneath their practices in terms of meaning, values and worldview. The engagement may not be through the spirit of a Buddhist but the senses of one.

The Spirit of Buddhism is well worth a read and purchase for those interested in Buddhism. It is a great introductory text as a whole, while engaging with the senses of a Buddhist is a supplementary approach that helps us move from understanding as a whole, to engaging an individual with the good news of Jesus Christ.