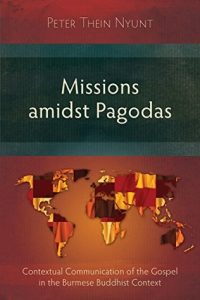 Dave & Leoni Painter have served in Cambodia since 2001. They are currently on study leave at Moore College. Here, Dave reviews Missions amidst Pagodas: Contextual communication of the gospel in the Burmese Buddhist context by Peter Thein Nyunt. Peter will be speaking at CMS Summer Conferences in January 2019.

Peter Thein Nyunt is a native of Myanmar, a founder of the Rahkine Missions Band for Christ (now numbering more than 2000 former Buddhists) and holder of a PhD in missiology from the South Asia Institute of Advanced Christian Studies (SAIACS) in Bangalore. As such, he is amply qualified to write about the efforts of Protestant missionaries to reach the Burmese. His book, Missions amidst Pagodas, is a reader-friendly version of his doctoral thesis, made available to a wider audience by Langham Partnership.

Peter was a Buddhist monk who, one day while pondering upon the 227 precepts, asked himself if his good works could save him. Realising that his moral efforts and discipline were not effectual for salvation, he went seeking assurance. A Christian pastor discussed Jesus Christ with him and, realising that he was a sinner in need of forgiveness, he accepted Jesus as his personal Saviour and began to serve him as Lord.

In Missions amidst Pagodas, Peter analyses the approaches of Protestant churches in reaching the Burmese Buddhists in Yangon City, Myanmar. He notes that, so far, almost all attempts have failed to meet the challenge. Christianity is still regarded as a “potted plant” that has failed to take root in Burmese soil. Peter then seeks to develop a paradigm of contextual communication for taking the gospel to Burmese Buddhists.

Right from the beginning, the enormity of the challenge is made clear: “the Burmese philosophy is all-pervasive, permeating the concepts and worldview of a people and saturating their culture, language, education and attitudes with Buddhist views” (xv). Furthermore, “Christian communication and churches are erroneously seen as outside intrusions and foreign imports to be avoided like the plague” (xvi). The churches in Yangon are made up of minority people groups who readily invite the Burmese Buddhists in, but are shunned by them.

Peter’s solution is “a contextual-local congregation” that aims at “helping its members to remain within their own culture and community, so that the congregation is not seen as a foreign element in the context”, rather than “extracting its members from their culture and community” (p.15). He helpfully criticises “extraction evangelism” (p.94) but does not fully engage with the problems faced by Burmese converts who continue to participate in Buddhist religious activities (p.110), that is, how to be involved without partaking in idol worship.

Most of Peter’s commentary resonates with missionary efforts in other parts of Buddhist South East Asia: “In reality, Buddhism is merely a platform for nationalism” (p.37). To be Burmese, Thai or Cambodian is to be Buddhist, “like two faces of the same coin” (p.39), so local converts to Christianity will be (wrongly) accused of betraying their nation.

Peter is often critical of the approaches of missionaries, of particular note, Adonirum Judson’s Bible translation (p.73) and his relationship with the British colonialists (p.68–70). However, I believe more attention should have been given to the context of these mistakes and examples given of what Judson, as a pioneering missionary seeking to contextualise the gospel, achieved long before the word had even been invented.

This book offers many helpful insights for missionaries coming to grips with contextualisation from someone who has come from a Buddhist background. It is particularly useful for those involved in work with Buddhist peoples. However, I would suggest that for an overall understanding of Buddhism and the challenges it poses for gospel ministry, you first read Burnett’s The Spirit of Buddhism.