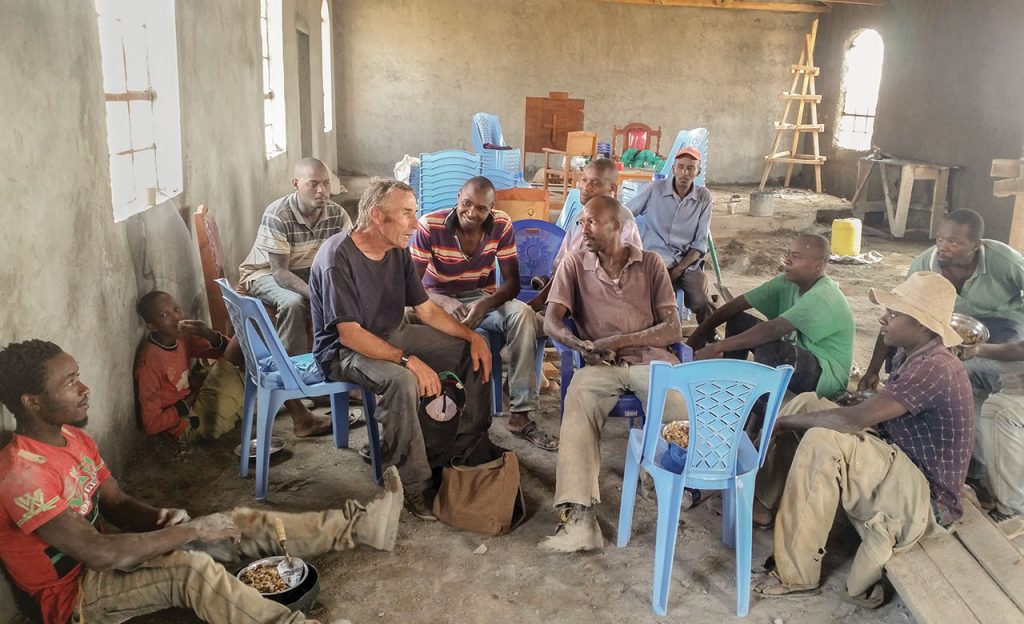 Norm Gorrie with members of the Gabra people group in Kenya.

When the needs throughout the world are so great, how can we decide where to send those who offer themselves for work as CMS missionaries? The CMS vision to reach gospel-poor peoples for Christ is crucial to a prayerfully undertaken decision, as CMS NSW & ACT General Secretary Malcolm Richards explains.

“Those who were not told about him will see, and those who have not heard will understand.” (Romans 15:21)

This marvellous verse from the prophet Isaiah, cited by Paul in Romans, encapsulates the CMS vision that people from all nations, tribes and languages would come to see Jesus as Lord and Saviour—a world that knows Jesus.

We passionately want people to come to a saving faith in Jesus, especially in gospel-poor areas. In service of this aspect of our vision, we send workers to the mission field for the long haul. We insist that they learn language and culture, and we encourage them to form deep relationships so that people will hear the gospel proclaimed and see the love of Christ demonstrated as our missionaries meet needs and work for the communities they live in. In some gospel-poor locations, our workers are free to share the gospel openly. In other locations, they must work quietly, using their professional background as a vehicle for sharing Jesus. Whatever the context, we desire to see people come to know Jesus as King. And we concentrate on gospel-poor people groups for whom, without the intervention of Christians coming from outside, there is little or no opportunity to hear the gospel.

The heart of God’s plan: the establishment of the kingdom

The apostle Paul, steeped as he was in the words of Isaiah and other Old Testament prophets, understood the heart of God’s plan: that through his Son, the King promised from David’s earthly line, God’s eternal kingdom would be established. So through Paul, God commands those who have put their faith in Christ to work for the establishment of this kingdom through gospel proclamation. Paul, in Ephesians 3:10, says that God has given to his Church the extraordinary task of declaring the gospel to the whole of creation. In Romans, Paul applies this plan to his own life, saying, “It has always been my ambition to preach the gospel where Christ was not known, so that I would not be building on someone else’s foundation.” (Romans 15:20)

As we work together with churches to send cross-cultural missionaries, the CMS fellowship must, following Paul’s example, adopt God’s vision for this world and make it our vision. And we must, like Paul, passionately take our part in the ambition to take the gospel to where Christ has not been named.

As we fulfil the reach aspect of our vision, CMS must make some careful decisions.

We will not go to those who have a strong Christian church nearby which has the capacity to witness to those around them. We will rather go to where the church is small or non-existent. That’s why we will send missionaries to a people group in East Asia which is ‘gospel-zero’—a location having almost no known believers.

Alongside this, we recognise that some who once had the gospel are now gospel-poor, and need to have the gospel reproclaimed in this generation. So we are sending Erin Moorcroft to the Republic of Ireland, where evangelical Christians represent less than one per cent of the population. She will be sharing the gospel with youth and children in a rural Anglican diocese. Pray that we will find more workers like Erin.

We will also inevitably be sending workers to hard locations that are risky in terms of personal safety. This is sometimes a challenging concept for supporters in a risk-averse country like Australia. Many gospel-poor peoples live in countries where security cannot be guaranteed. Yet workers often testify that gospel opportunities increase as a country becomes more chaotic. So CMS will continue to send missionaries to hard places. One woman is about to go to a location in South Asia where security is a constant issue. She will use her professional skills to serve there, looking for opportunities to speak of Jesus in her context.

As well, we need to send workers to situations that are producing little fruit. Not everyone can work faithfully for years with little obvious result. But the history of mission shows that such long-term, faithful ministry is needed for the gospel to take root. So we need workers like Kingsley & Veronica Box who have worked for many years in Slovenia where church growth is so slow.

Australian Christians must continue to reach gospel-poor peoples for Christ. This is not just part of the CMS vision. It is Christ’s command to his Church. Yes, we will work hard to reach those who now live in Australia. But we should never be content with that! There are millions around the world who will only hear the gospel of Jesus if the Church here sets aside workers and sends them. Will you commit to a long-term partnership with these workers?

A CMS missionary couple serving in South East Asia have had the joy of seeing people become believers. He writes: “Our involvement in a local gathering has been full of surprises through the struggles of culture and language. One Sunday in 2017, I preached in our gathering, prayed the ‘sinner’s prayer’ with a new attendee and baptised five new believers. These five people—four university students and a lady in her sixties—had started coming only a few months before.

“Because of security concerns after our last attempt in a local pool, the baptism took place in the ground floor of the house we usually meet in. A new waist-deep portable pool was erected, so climbing in and out proved difficult and a bit humorous to watch. Yet it was an occasion full of praise to our Saviour, and resounding applause for the step of faith of those who renounced the world and the spirituality of their past, and proclaimed their trust in Christ.

“It wasn’t a typical Sunday but was evidence of the Church growing in a South East Asian gospel-poor city.”

CMS missionaries Norm & Janelle Gorrie reported in 2017 that the Gabra people in Kenya, from a cult background known as Ayyaana, turned to serve the Lord Jesus in unprecedented numbers. Sixty-three households (five communities) made commitments to follow Christ.

A month later, Norm and a team were able to return to the village to encourage the Gabra people and help them to construct a corrugated iron church building. They met with the men and read God’s word with them, which was of great importance as the Gabra culture is very patriarchal. Norm reports that 50–60 Christians now meet in the new church building for regular fellowship. As well as constructing the building, Norm and his team were able to use their truck to transport jerry cans of water to the community, providing great help in a drought-stricken area.

Norm sums up: “Even though drought has hit [the people hard], their passion for God is amazing. They literally pant for the word. We believe that this village has become an oasis in the desert. They still need guidance and support. Keep remembering them in [your] prayers, especially Mr Gufu, who is the village elder. He is under pressure from the traditionalists.”

Is the CMS vision to reach gospel-poor peoples for Christ only to be put into practise by a chosen few? Or should all Christians be personally involved? Download a Bible study that explores these questions.

Or perhaps you’re ready to explore the possibility of going? To reach gospel-poor peoples, many CMS missionaries in places like Slovenia, Japan and France have gone specifically in order to plant new churches. Could you join them or follow their example? To see our current opportunities, go to cms.org.au/opportunities/church-planting.