God of the living word 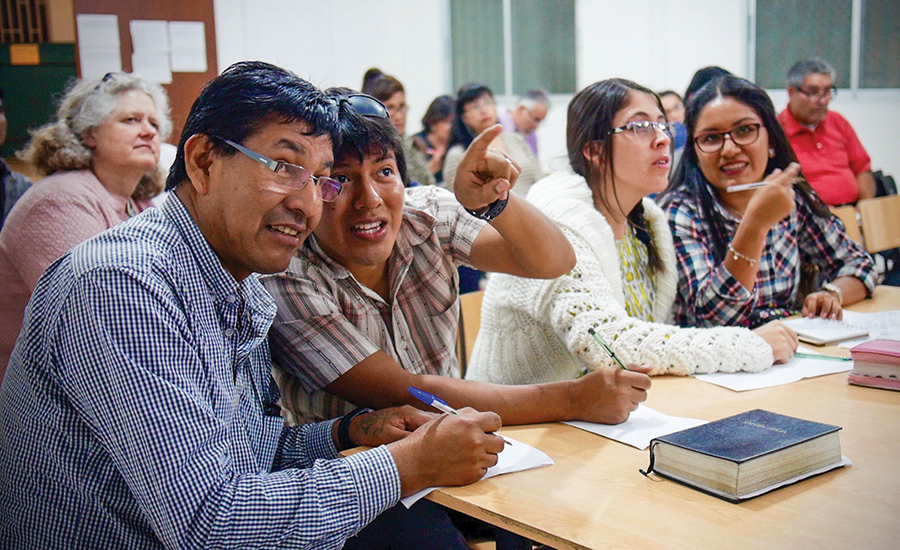 Frances Cook with students at the Centre for Pastoral Studies.

CMS missionary Frances Cook has confronted some extraordinary superstitions in her 30 years serving in Chile. In her role as teacher of Reformation church history at the Centre for Pastoral Studies in Santiago, she helps explain why Latin America has a profound need to trust in Scripture alone.

It was only 23 years after Christopher Columbus stepped foot on a Central American beach that Martin Luther nailed his 95 theses to the door of the Castle Church in Wittenberg. Following Luther’s famous bit of carpentry, Lutheran ideas quickly spread throughout the European continent. However Spain, with its famous Inquisition, was particularly efficient in suffocating the emergence of such radical thinking. Medieval Spanish and Portuguese Roman Catholic missionaries kept sailing to the Americas and the Inquisition went to work there as well, ensuring that a pre-Reformation form of Roman Catholicism took a strong hold, with the result being that the European Protestant Reformation effectively bypassed South and Central America. I believe that for the same reasons that the Reformation was important for those Luther ministered to, it is important for South American Christians today.

Five hundred years on, Latin American religiosity, untouched by the Reformation, still allows glimpses of the popular superstition and plain bad teaching that Luther and the other Reformers were up against. Let me give some examples:

The Diablada is a religious dance used in Chile for popular festivals in honour of the Virgen del Carmen. The dance originated in medieval Europe, but now includes local touches, such as condors (yes, the birds!) who supposedly protect sinners from devils. The dance itself was designed to literally put the fear of hell into people, so that they would be godly.

But who is this Virgen del Carmen who inspired the dance? There are so many virgins, official and otherwise, that it is not surprising that even many local Catholics do not realise that each one, in theory, refers to the mother of Jesus. Many see these virgins as spiritual personages who exist in their own right. These ‘virgins’ hold a spiritual authority all their own, and statues of them are found in many private homes. In their owners’ minds, the statues hold the key to specific miracles and to genuine spirituality.

Back in sixteenth-century Europe, Swiss Reformer Ulrich Zwingli argued that such statuary, along with all religious images, icons, dances and ritualistic superstition, were actually just an excuse for clerical laziness. In theory these add-ons existed as a teaching aid to help the people understand God and his word. But Zwingli and the other Reformers believed that the priests should instead have been working hard at studying and teaching God’s word (the Reformation principle of Scripture alone).

Zwingli’s observation can be echoed in twenty-first century Latin America, where the poor have generally been considered incapable of understanding theological truth. This is in stark contrast to the Reformers’ belief, grounded in Scripture, that the Bible is essentially intelligible to all in whom the grace of God has worked, regardless of their social standing or education.

The truths of the European Reformation are relevant to Christians everywhere in our world today. Certainly they are relevant in Latin America. It is not merely that such biblical teaching provides protection against superstition—it also teaches us how we can know the true God through the Bible alone.

Go to cms.org.au/give to support this important work by giving to CMS missionaries like MOCLAM director, Peter Sholl, serving in Mexico.