All Scripture is God-breathed 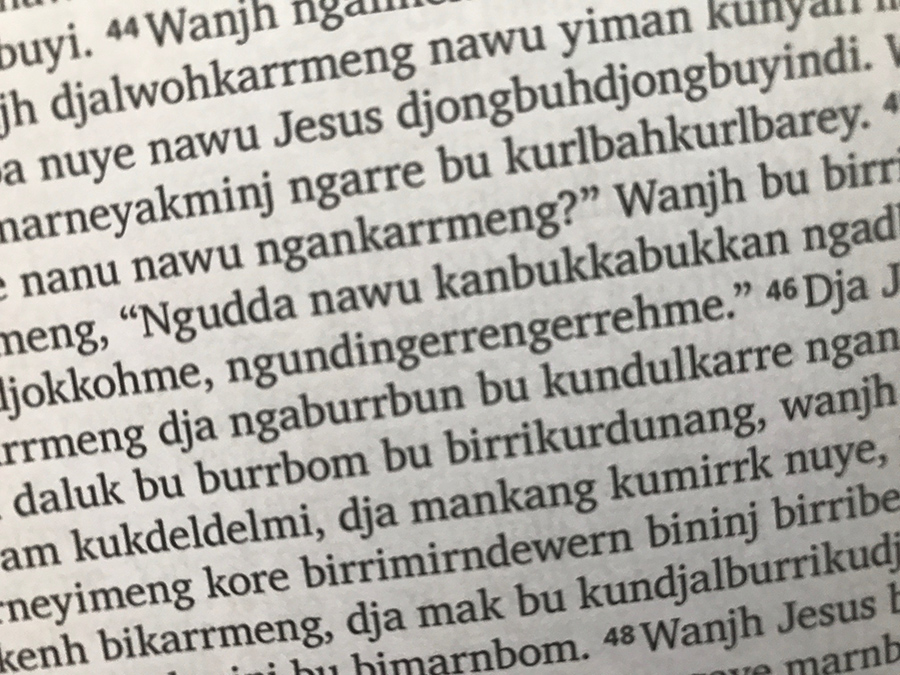 A photo from the completed Kunwinjku New Testament.

After more than 30 years of ministry in North Australia, recently retired CMS missionaries Steve & Narelle Etherington now share in the joy of seeing the New Testament translated into a local Aboriginal language. Checkpoint reports how the Reformation principle of Scripture alone has brought truth and freedom to the Northern Territory.

One of the bedrock principles of the Protestant Reformation, still relevant today, is Scripture alone: that the Christian faith rests not on the authority of the Church or a select priestly caste, but solely on God’s authoritative and inerrant word, as recorded in the Old and New Testaments.

But in a missionary context, there is a lurking danger that the authority of God comes to be seen not as resting in his word, but on the personal authority of the missionaries who brought that word.

Steve and Narelle Etherington realised early on in their missionary careers that if the Bible was to be seen as the ‘white man’s book’ rather than received as God’s word, then the principle of Scripture alone would be under threat in their Aboriginal community in Oenpelli. For this reason, since their arrival in 1984 in this small region in the north of the Northern Territory, they have worked carefully and painstakingly to translate the New Testament into the local language, Kunwinjku.

The full Kunwinjku New Testament is now complete, and will be ready for distribution by the Bible Society in 2018. Translations of parts of the Bible are already in the hands of the people. Now, in the words of Steve Etherington, “They want more!”

The word of God to you

Any process of translation could not be hurried and handed down from on high by outside experts. Steve Etherington commented, “If I say to people, ‘This is what the Bible says’, I also have to say, ‘White people didn’t write this. It wasn’t in English. Jesus wasn’t a white man. He didn’t speak English. This is something that comes direct from God to you.’”

Steve and Narelle needed to learn the language of the locals. Then, rather than trust solely on their own translation efforts, they worked closely, and over a long period of time on a one-to-one basis, with many members of the community. Together with Lois Nadjamerrek, who spent more than 20 years on the project, they and other community members brought the work to completion. Lois is now the ordained Anglican minister in charge of the parish at Kunbarllanja, and so continues to minister to the locals in the Kunwinjku language.

The translation work of so many comes with the deep conviction that the reading of God’s word, and its clear teaching, will bring repentance and assurance of salvation because of the finished work of Christ. The Etheringtons can clearly testify that many speakers of Kunwinjku are eager to learn more and live by the great truths of the Bible.

The work of teaching the Bible is being carried on by the next generation of CMS missionaries, Matthew and Lisa Pearson, who are settling in to Kunbarlanja to work with the local church leaders in ministries that will use the new translation.

Support gospel work in the Northern Territory by signing up to receive news and prayer updates from Matthew and Lisa Pearson about the continuing translation work of CMS at Oenpelli. Go to cms.org.au/pearsonml.