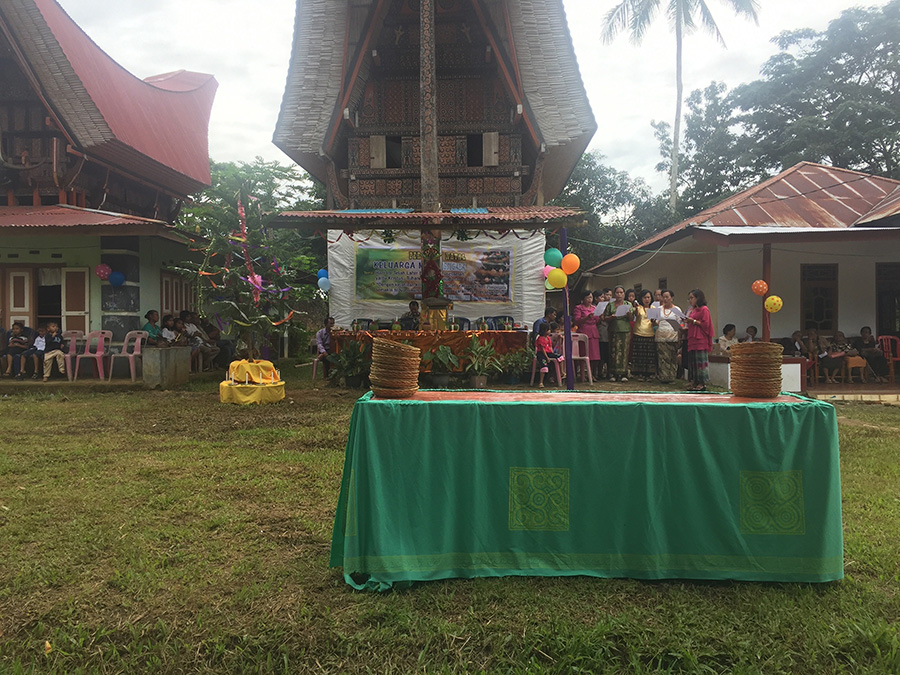 A Christmas celebration in Toraja, Indonesia, with a group performing a choral item on the right of the ancestral house in the centre.

Throughout December, some of our CMS missionaries are sharing what Christmas looks like in their locations and how they celebrate Jesus’ birth. This week we hear from Andrew Buchanan & Abi Tandiseru in Toraja, Indonesia. For the first post in this series, on Germany and Japan, click here.

Indonesia is constitutionally religious but officially neutral with respect to the six national religions, two of which are Roman Catholicism and Protestantism. Christmas Day is a national holiday (along with Good Friday and Ascension Day) and often the government declares another day of ‘shared leave’ the day before or after, particularly if this can be combined with a weekend to make a longer holiday. This enables Indonesian Christians in general to have Christmas services on Christmas Day.

Toraja, where we live, is a majority Christian area within Indonesia so in addition to Christmas Day, many organisations, workplaces, church ministry groups and families put on a Christmas event as an annual celebration of the group. As New Year’s Day is also a national holiday, many Torajans who live out of the area take a holiday back in Toraja with extended family.

This may remind you of Australia, but the celebrations in Toraja are still religious instead of secular. For church groups and families, the celebration will begin with a service (including a sermon, prayers and several choral items), some other activities (including at least one speech), and end with a meal. In 2016, two different parts of Abi’s extended family put on such a celebration. Both used the same areas that they use for funeral ceremonies and wedding receptions—ancestral land bounded by a row of houses on one side (including a traditional ancestral house) and a row of rice lofts on the other. The ceremony was conducted from the small verandah at the front of the ancestral house, and people sat in the verandahs of the other houses, beneath the rice lofts and in areas covered by temporary awnings. This provides a Christian way for the extended family to maintain their family identity in a Torajan way.

Each Christmas service requires a preacher and most groups prefer the minister over elders. If we imagine a church with four ministry sectors (a medium-sized church), each of which has a Sunday school, youth, women’s and men’s ministries, in addition to the sector as a whole, then per sector there will be five Christmas celebrations, plus five for the congregation as a whole. That makes twenty-five Christmas celebrations before we start counting family celebrations as above. Because there is much overlap between the different groups, the minister usually has to prepare (many) more than just one sermon. Not surprisingly, books with lots of short Christmas talks are quite popular! The continual challenge for ministers, and for congregation members who may attend a dozen or more of these, is for the shared services of word and prayers to be genuine celebrations of God’s great gift, our Saviour, Jesus Christ.

Thank God for his great gift to the world, our Saviour, Jesus Christ.

Pray that Christians in Indonesia would genuinely praise God for this gift at each of their Christmas services and celebrations.

Thank God that there are so many opportunities for people to hear the gospel in Toraja at Christmas.