Behold, I am reborn: Stories of God’s restoring power 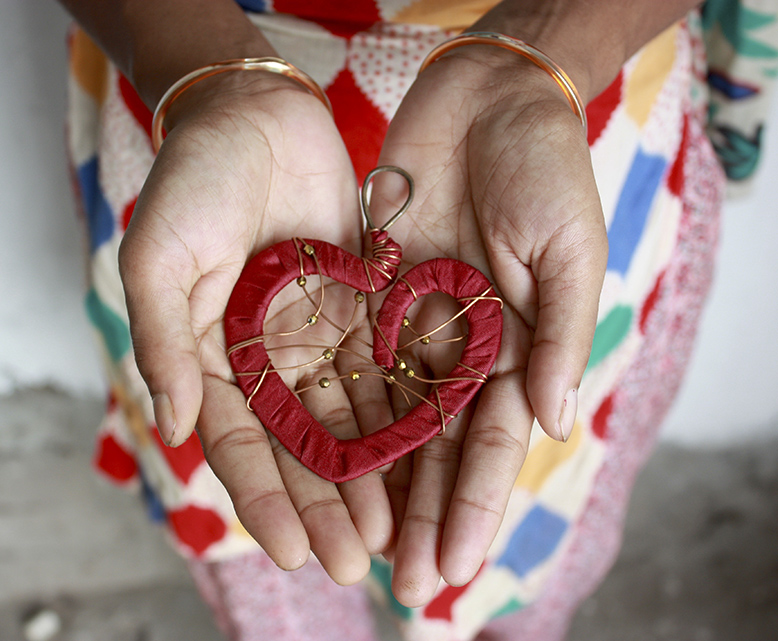 Can God restore our broken lives? Here are the stories of Rabia and Asha*. Through CMS worker Olivia’s* company in South Asia, they have learnt of the grace and mercy of the God who gives healing.

Living and working in South Asia, in a society divided along gender lines, I thank God every day for providing a workplace full of females. I work at a social business that provides employment for women at risk and survivors of trafficking.

It is a daily privilege to see God at work. He is creating something incredibly beautiful for his glory out of broken and hurting lives. Here are two such stories.

Rabia was only about 15 years old when a relative said they would get her a job. Instead, she was sold to a brothel. She spent the next 25 years of her life working as a prostitute. By the wage standards of South Asia, she made good money. But she was always ashamed.

She had two daughters and she sent them away from the shame of the brothel to live with relatives. She paid for them to have a good education. They wouldn’t acknowledge that she was their mother, however, and her reputation could easily stain their futures as well. Eventually she decided that, above all else, she wanted a relationship with her daughters. The Salvation Army helped her leave the brothel and gave her training and support to adjust to a new life and to learn to sew. She is now one of the first employees at one of our regional offices that opened in January 2017 in her city.

Rabia’s older daughter is married and lives with her in-laws. Her younger daughter is studying in the capital city and works part-time. Now that Rabia has been able to leave the brothel, her daughters acknowledge her and she has restored her relationship with her other family members as well. With some of her earnings from her new employment, she was able to pay for her daughter’s previously unaffordable school exam fees.

We are so proud of Rabia and her drastic life change after so many years. We love to hear of her restored relationships with her family, and to see her pride and love as she talks about her daughters. She works steadily and carefully, proud to be sewing blankets and living a dignified life. She recently said, “I am not ashamed of my past life as everyone loves me here and I can see the change in my life through dignified work.”

Asha is an employee at our office in the capital. She was born in a rural area. There were eight in her family and her father was the sole breadwinner. His income was not enough to provide for their basic needs. Most of the time, the family were starving.

Asha’s father died when she was about 12 years old. Since no one was earning money, she was sent to the capital city to work as a house helper. Her employer abused her and Asha became pregnant. She was in her early teens. She ran away from the house and took shelter in a graveyard. A woman took Asha into her house and then sold her into a brothel. There she gave birth to her first child and gave her baby away to an orphanage.

Asha met her husband in the brothel where he was one of her clients. They got married and she left the brothel and went to her mother-in-law’s house. Her mother-in-law abused her emotionally because of her past life. She ran away again to the capital with her baby son and earnt money through street prostitution.

Asha heard about our training program through one of her neighbours. Before participating in the program, she couldn’t read or write. Asha can now sign her name. She is still struggling to learn to read and write because of the effects of the trauma she has experienced. But Asha wants to work to provide hope and a future for her son. She wants to educate her child so he can have the opportunities in life that she was never given.

At the ‘new life celebration’ in the training program, Asha proudly wore a white and red sari. She said, “We are wearing white to symbolise holiness, a fresh mind, a new life. Red symbolises love.” Asha is working hard to earn a living. In her past life she also worked hard, but there was no dignity. Now she has dignity in her life. She believes that God will bless her work and one day his Son will wipe away her tears.

We face many disappointments as we seek to serve women like Asha and Rabia. The women struggle with parenting. One woman committed suicide and others have attempted to do so. But God’s Spirit is at work. Just as the making of a blanket takes much effort and many hours before old, worn fabric is transformed into a thing of beauty and warmth, so the Holy Spirit’s gentle and persevering ‘stitching and patching’ is healing hearts, renewing broken minds and gently calling them to the Father’s heart.

Jesus poured out everything of himself to enable us to come to God. When we pour out ourselves in loving works of mercy and justice, then the gospel we bear is that same tangible water of life promised to the woman at the well. And God’s light shines brightly still in the darkness.

We seek to show every woman their value in Christ. They have been created in God’s image. They are worthy of his love and made blameless through Jesus’ sacrifice. Their lives matter.

The company that employs Rabia and Asha relies on generous support to keep people like Olivia on staff. As we pray for a just society where women are protected and valued rather than forced into degradation and poverty, consider giving a financial gift that will make a difference.