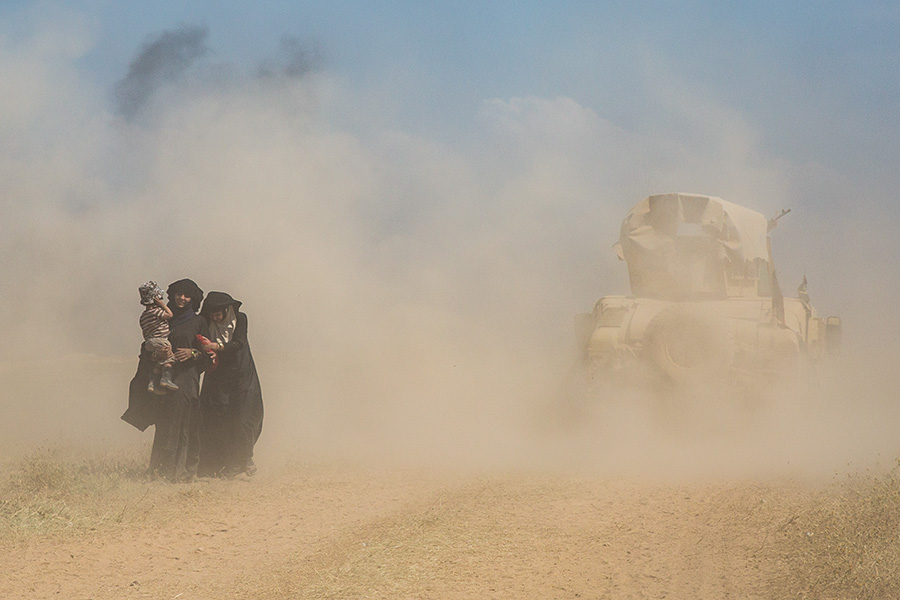 Refugees fleeing a war zone in the Middle East.

Once people recognise that Jesus is Lord, no amount of discouragement or persecution can shake them loose from their commitment to him. CMS worker Jane* has seen this first-hand in the life of a Christian woman she visits regularly. Learn here how Christian women and their families persevere through strong opposition, attack and setback.

“Now pour the dried mint and cumin into the bowl.” Om Zayid* and I are crouched around a single gas burner on the floor of her tiny kitchen. We’re making raw kibbeh, meatless burgul patties. I pour out the mint she dried herself, now stored in an old plastic water bottle. She laments that the tomato paste is not homemade, because she has no access to the roof of her building to dry the tomatoes. Everything about this 65-year-old Syrian woman’s home speaks of resourcefulness.

I began these visits late last year when another couple from CMS were leaving the country and introduced us. Her small unit is located in a pocket of the city known for its tribal mentality, so I slip on a headscarf in the taxi on the way. But now, after the meal, we sit on the floor and recline back onto foam mattresses, and she tells me stories from her life. She describes the Syrian countryside and the irrigation canals watering the farms. She tells me about long hours she worked in her home sewing business. She tells me of being widowed with five children at home and how she had to battle against cultural convention to keep her children with her in their own home. Often teenage girls in their situation would be married young. The younger children would then be sent to live with relatives.

Om Zayid has always been religious, but says, “Our sheikhs didn’t teach us what the Qur’an says about Jesus. Actually, they treated my husband awfully because he was open-minded. He had always told me the Christian scriptures are true. But I never knew what was in them.”

In 2013, when the war made her home unliveable, Om Zayid left Syria with her youngest son, Fady, 19, and met her older son Zayid who was studying abroad. Her daughters, older and married, remained with their husbands in Syria. When Zayid’s study visa ended, the three travelled to this Arab country to seek refuge. After several months, and with his mother’s blessing, Zayid found work elsewhere and left.

With no source of income, Om Zayid sought help from an assistance program run by a local church. She said to me, “All my life the people who were most religious were the people who cheated and deceived, but here was a church of people who were honest and full of love. They visited me at home and invited me to come to a meeting on Sunday. I was too scared to walk up the stairs when I arrived, but someone came to greet me and I went up. I started to read a gospel they gave me. And every week I was growing more and more attached. I couldn’t sleep on Saturday nights waiting for Sunday to come. But then I started not being able to sleep at all because I was thinking so much. I was praying and praying that God would show me which way was true. After about seven months I had a dream about Abraham. I asked Abraham about Jesus, he gripped my shoulder and told me, ‘Jesus is the way of truth.’ So the next day I told the whole church that I believe.”

Her journey since then has not been easy. Neighbours have followed her to discover where she goes on Sundays. Her landlord threatened to evict her if she keeps attending church. A rock thrown by youth hit her on the shoulder. Recently she walked out on a Sunday morning to find a cross shape smeared with faeces on her front door.

When I visit her, she opens whatever book of her Bible she has been working through that week and we share our thoughts on it. We talk about what it looks like to obey it. And we bring our praise and requests together to our heavenly Father. We’d prayed a few times for her safety and then began to ask God to help her with fear. A while later a Muslim woman waiting outside the church angrily questioned why she was there. She paused a moment and said, “I am a Christian,” and told me later, “I don’t feel afraid.” Now we pray together, among other things, that God would bless her neighbours and show them that his way is good.

Last week we heard disappointing news. Zayid, her oldest son, was trying to travel here to join their application to be resettled in Australia as refugees. Paperwork was sent back and forth. Appointments were attended there and here. Authorities were petitioned. He took a very risky journey through a conflict zone. And after three months of work we heard he would not be permitted to travel.

17 June was one year since her baptism, and I asked Om Zayid, “What is the most significant thing you have learned since coming to know the Messiah?”

She said, “The most important thing is persevering. God gave Abraham a promise, but Abraham had to persevere for so many years before he saw the answer. It’s not just persevering, but persevering with contentment and entrusting yourself to God because he is good.”

Give a financial gift that will directly support workers in locations where gospel progress can face significant opposition.