The future is student-shaped? A report on mission at student conferences 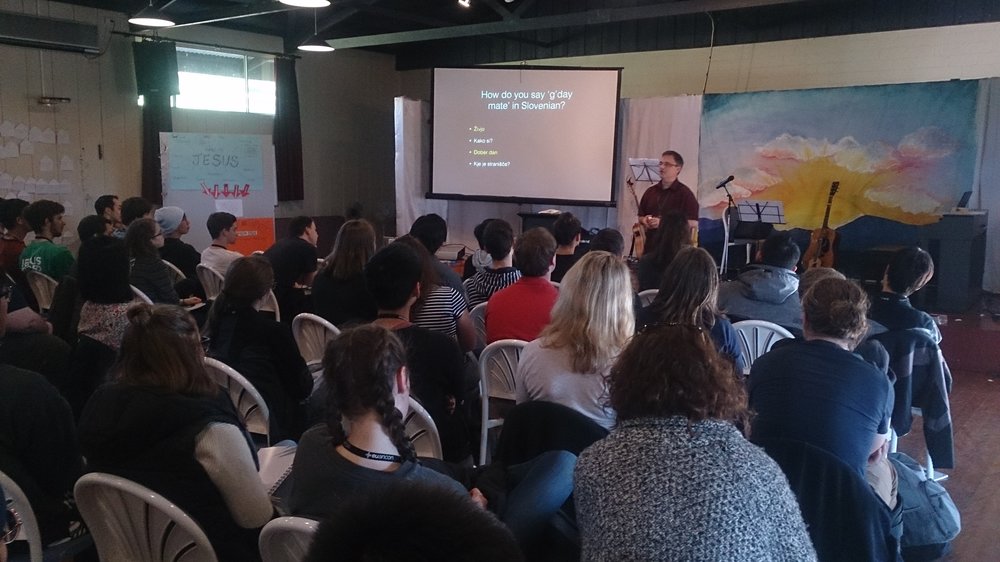 Every year, Christian groups from campuses around Australia run conferences at this time where the Bible is taught and the challenge of the gospel is put to hundreds, even thousands, of students around the country. Gordon Cheng visited some of these conferences and reports here on the CMS presence at Sydney University’s Annual Conference (AnCon).

One of the statistics we don’t speak much about in CMS circles, but are nonetheless keenly aware of, is that as many as 90 per cent of those who are currently on the mission field have passed through our university Christian groups and, in many cases, had their desire to speak the gospel greatly strengthened and deepened by their time on campus. So we are always interested when the direction of the flow reverses, if only briefly, and a number of our workers end up going back to the campuses to speak to students.

One of the more ‘intentional’ campuses in this reverse flow is Sydney University, where the Evangelical Union (one of the oldest in the country) deliberately invites back missionaries on leave to speak to their students about the gospel, and how the gospel by its nature pushes us to reach ‘gospel-poor’ people with the news that Jesus is Lord.

Kingsley Box, who together with his family are back from Slovenia for a few months of Home Assignment, asked students to consider, “What are the odds?”

That is, what is the likelihood of meeting a Reformed Protestant Christian on campus who would be willing to speak with knowledge about the Bible’s teaching, to read the Bible with a non-Christian, and to answer their questions with a clear statement of Jesus’ kingship, and that God had sent Jesus into the world as a propitiation for our sin?

If you were at any major campus around Australia, or even a smaller campus, the likelihood would be high indeed that, not only would there be a large and well-attended public meeting presided over by staff and student leaders and featuring biblicaly brilliant teaching, but as well as this, there would most likely be easy access to one of a range of small group Bible studies and opportunity for in-depth leadership training.

Kingsley showed videos of students confessing that they had gone through entire courses at major Slovenian universities, undergraduate and postgraduate, without once meeting a Christian with a solid knowledge of the Bible and what Christians believed.

In a similar vein, Paul and Sandra King explained to a large group of 650 students at Sydney Uni’s AnCon that it was not legal for Christians to book rooms or advertise Christian meetings on Parisian campuses in France. This can put serious spanners in the works of any Christian group’s plans to run public meetings explaining the gospel. (Interestingly, small groups discussing the Bible as literature are just fine and represent one good way of making contact with unbelievers.)

Both the Kings and Kingsley, as well as other missionaries who visited AnCon, spoke with one voice about how the gospel itself shapes our attitude to how we use our lives.

In Slovenia, the battles against materialism, intellectual tolerance and Roman Catholic traditionalism (the latter teaching that the cross Is not enough to deal with sin) are met by the Bible’s challenge that life without God, as Ecclesiastes teaches, is completely meaningless. It is made meaningless because it is theoretically possible to gain the world but lose your very soul (see Mark 8:36). Not only that, but the law of God, and sin, and death put an end to our earthly aspirations. The only victory possible in such circumstances is the victory that Jesus wins over death and sin through his resurrection from the dead (as 1 Corinthians 15 teaches).

Echoing this challenge, Paul and Sandra King challenged those who attended their ‘Less Reached, Less Resourced’ seminar to put their own lives on the line so that others might hear. (The seminar’s title refers to the people in our world that have not heard the gospel and have less opportunity to do so because their people groups are ‘gospel-poor’.)

They dealt with a number of common objections as to why students might hesitate to go and speak the gospel to others in other places. “I’m afraid. I might fail. I haven’t ever been overseas I’m not sure I have the gifts. My career is very important. My parents are counting on me to help my brothers and sisters get through uni. Others can go.”

Against such objections, the Kings and other CMS missionaries made a number of strong points. Most importantly, it is God’s plan to save the world through Jesus, and Jesus himself tells those who follow him to go into the world and bring the message of the kingdom to them. Not only that, but the command to “love your neighbour” brings into sharp relief the enormous needs in other places for the gospel to be heard – places which, as those on the mission field know, sometimes have little or no gospel witness.

As well as that, a number of practical considerations were mentioned. University students have good education, they are articulate, confident in meeting people, enjoy good finances and generally good health, and what’s more, they have an Australian passport that gains them access and protections that many do not enjoy even if they wanted to go somewhere to do mission.

Kingsley Box advised students considering mission to get started now. Be active at church in ministry. Apply to be a ministry trainee or get training at a Bible college. Talk to CMS to investigate possibilities. Get cross-cultural training here in Australia, as well as inviting prayerful and financial support. Perhaps take up an opportunity to do study in a particular country where they might serve.

In other words, there were numerous suggestions about where to go and how to get there. All who spoke including the AnCon main speaker and EU campus director, Rowan Kemp, were of one voice in pointing people above all to the radical grace exercised by Jesus when he left heaven to take up the cross. He left us in no doubt as he addressed us on the subject of Jesus’ victory over death by the cross: “Jesus is not a concept, Jesus is alive! Jesus is alive and he is Lord!”

It is because Jesus is Lord that CMS, and those who support CMS, want people the world over to hear from students and others that he is their king as well.

Are you considering mission? Get started now. Be active at church in ministry. Apply to be a ministry trainee or get training at a Bible college. Talk to your local CMS branch to investigate possibilities.