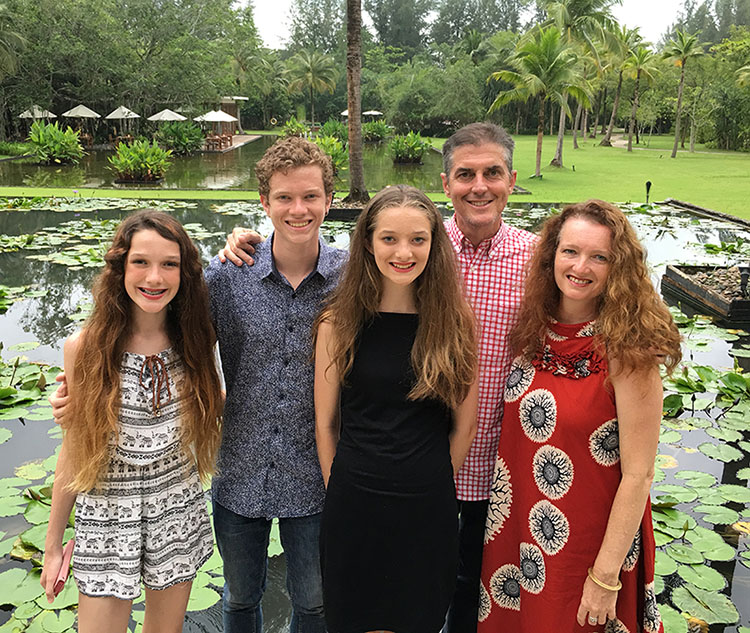 Paul and Cathy Sampson returned to Australia in December 2016 to complete their final Home Assignment and finish their missionary service with CMS. After seven years in Kenya, Cathy writes about what it means to be leaving one home behind to return to another home.

In the 2017 IKEA catalogue, there was an article asking the question, “What makes a home a home?” The question was posed to a variety of people, including a recent refugee. I found it intriguing to ponder this and note the responses given because this has been a question we have asked ourselves during our time in Kenya, but even more notably since we have been back in Australia. As we seek to re-establish ourselves in our ‘home’ country, whilst our heads are still full of almost seven years of what has been our ‘other home’, the answer doesn’t immediately seem clear.

We arrived back ‘home’ to Australia six months ago in December 2016.

Next month we move into our new home back here in our ‘home’ country and yet all five members of our family are feeling decidedly displaced. The most recent home we have known was in our host country – in Nairobi, Kenya. Our most familiar and current memories of home include electric fences, weekly blackouts and solar lights, the sound of the generator giving us power during those black outs, finding chameleons in our garden, sitting at a slightly warped dining room table built by workmen at the side of the road we drove along each day, driving past makeshift lean-tos laden with local produce being sold by local farmers, smelling the small fires burning off trash at regular intervals alongside the roads, watching torrential rain through our windows during wet season, running through torrential rain to catch the school bus in the afternoons along with students from 25 different nationalities, and our security guard dogs greeting us at the home gate opened by our security guard.

Now we are moving to a new suburb where my husband will start a new job at a new church. We will move into a new house with new (second-hand) furniture as we sold all our own furniture when we moved to Kenya seven years ago. We will have to make a whole lot of new friends and the children will have to attend a new school. My children don’t have a set of friends that they have built up over years of attending church and school in Sydney – those seven years’ worth of friendships are back in Kenya or have moved back to their own ‘home’ countries around the world. Most likely our children will never see those friends again other than on Facebook.

Some days this simply feels overwhelming for each of us. There is almost no comforting familiarity in our lives currently, other than the accent we hear around us all the time now – that accent we missed so much when we were in Nairobi.

However, being ‘home’ in the broader sense means that sorely missed grandparents, aunts, uncles and cousins are all much closer now. We don’t miss out on family birthdays and Christmas gatherings, we have the same sense of humour as people around us, we can have TimTams without having to ask Australian travellers to Nairobi to stash a few packets in their luggage, we don’t have people screw their nose up at us when we put vegemite on our toast, we understand (if not necessarily agree with) the politics, and we drive alongside law-abiding and mostly predictable drivers on roads that have curbs, guttering and no potholes.

So whilst we have ‘come home’, the reality is actually complicated. Whilst there are significant people and things we have missed, in many other respects we are starting all over again.

So what makes a home a home? WE do! As we re-establish again in the midst of all that is new, we can anticipate that in time we will build new memories that make our new house feel more and more like OUR home! And most importantly, one of the main things we have learnt to reflect on as a family through all the changes of earthly homes (and there have been a significant number!) is that, in the end, our real home is heaven.

Pray for missionaries like the Sampsons who have finished their overseas missionary service and are re-settling back into Australia. Pray that they would look to God and their heavenly home in times of uncertainty.