Fastening your seatbelt for re-entry: Rhythms and relationships 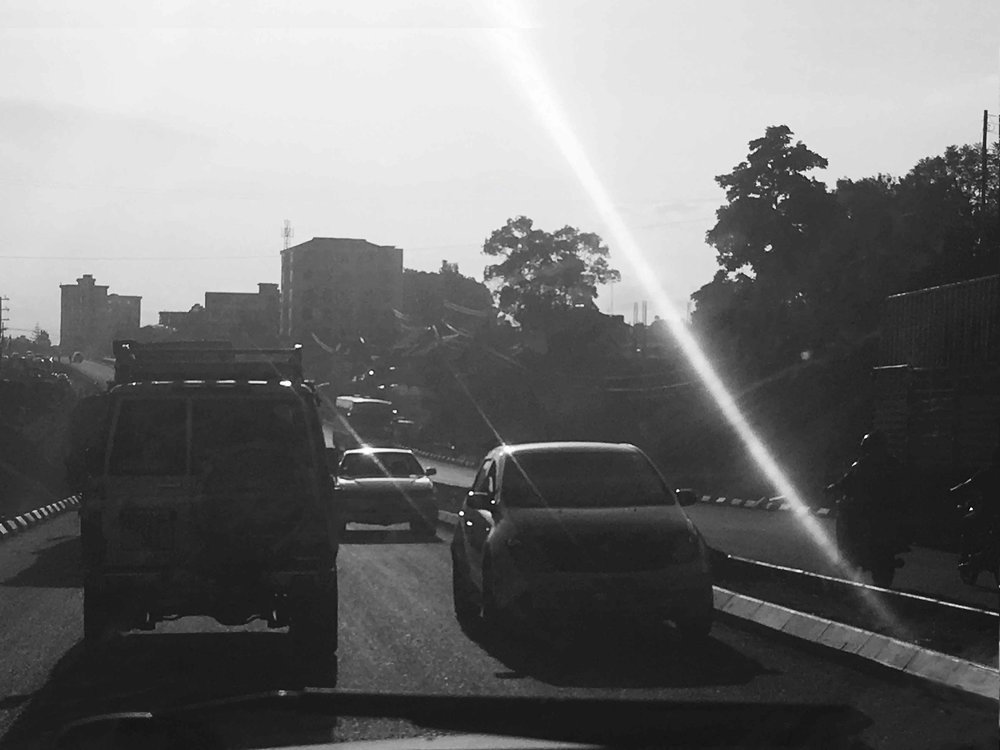 Geoff and Martha Boye returned to Tanzania in January 2017 for the start of their second term as CMS workers. Martha reflects here on her family’s first re-entry and the benefits of being long-term missionaries.

When you hear the words ‘dual carriageway’, I suspect that you have the same understanding of this as I do – a road divided by a median strip where vehicles drive in opposite directions on either side of the barrier.  A road designed with a median strip down the middle to make it as safe as possible. Actually, this is a cultural interpretation!

After landing in Tanzania following six months Home Assignment in Australia, we took control of our trusty Land Cruiser and endeavoured to make our way across Arusha town to where we knew our friends were waiting for us. We really just wanted to crawl into bed right away but a ‘choose your own adventure’ style drive lay before us. We had to navigate the new dual carriageway that was half-finished in the time we had been away. Not hard, you say? Well, as we drove in the dying light we realised just how challenging it would be as a truck, then a motorbike, then a car, then another Cruiser came hurtling towards us on our side of the road. Suddenly the wisely designed ‘safe’ dual carriageway became a hazardous journey. It appeared that in others’ minds, two beautifully tarred roads separated by a median strip had an efficiency design behind them rather than a safety design, simply allowing more traffic to pass. How efficient that all vehicles could now travel in both directions on both sides of the road! Thankfully, we arrived safely at our friend’s home with many chuckles along the way.

Understanding the rhythm of life and building relationships are two skills that allowed us to navigate not only that drive, but re-entry into a country where we had already spent three years. They are skills which come with time and explain why long-term mission is a wise model for CMS to adopt.

The rhythm of life

When you first move to a new country and culture, you are like a stunned mullet. When we first arrived in Tanzania in 2013, we were in this constant haze of surprise, astonishment, wonder and confusion. We encountered so many new things and were bombarded by so many new experiences and interpretations of life. From polygamy to dual carriageways to how a queue operates in Tanzania so you actually get served. Having some understanding of the rhythm of life where you are living helps a great deal!

The fact that there is a need in our world to understand so many different cultures should send our minds back to the tower of Babel (Genesis 11). This is not the natural state of the world. There was once one culture but our sinful nature proved itself to God when the people of that time sought to build a tower to the heavens to make a name for themselves. They sought to rule instead of submit to God their creator. Such plans were egotistical, proud and dismissive of God as king. God was active in destroying their evil plan of world domination.

The LORD went down and confused their language so they could not understand each other and scattered the people from there over all the earth.

So now we move through a world that has many cultures and languages, many of which have moved further and further away from knowing God. It is wise of CMS to encourage missionaries to live in a different culture for a long period of time so they can harness a deeper understanding of why people in that culture behave and live as they do and why they believe or don’t believe in our great God.

Despite God’s quick action in Genesis 11, God also knows that the natural sinful rhythm of peoples’ natures and lives shows we need a relationship like none other. We need a renewed and restored relationship with God himself.

We all understand the need for relationships. Yes, some crave being in relationships more than others, but in essence God made us like him, like the trinity, as relational beings. One of the truly wonderful things about returning to Tanzania for a second term is meeting people again after being away. To return to Munguishi Bible College and greet the staff and students was heart-warming. We haven’t conquered Swahili and probably never will and we still don’t understand many intricacies in Tanzanian culture, but we feel comfortable here and have dear relationships with our Tanzanian Christian brothers and sisters.

This desire to return to relationships, to people and to a culture that is not our own is a witness to our love for our Tanzanian brothers and sisters. One student said to Geoff, “I am happy to see you and I am surprised you came back.” Obviously Geoff asked why he thought that. He responded, “Well, Australia must be so nice compared to Tanzania I thought after being away for so long you would just stay there.”

We agree that Australia is a lovely place and we miss it, however we have enjoyed coming to know another part of God’s world. Really though, of most importance is helping people know and understand that the most vital relationship they need to restore and deepen in maturity is the one with our heavenly Father.

We began relationships in Tanzania in the first three years we were here and now in returning, those relationships will deepen. That depth paves the way to allow us to encourage each other, to build each other up in word and deed, as well as to correct and train in the word.

Our deepening relationships and familiarity with the Tanzanian rhythm of life helps us as we seek to train and equip Tanzanian Christians to be leaders in the Church. We can help them to see where their culture may hinder their Christian growth. For example, the blending of local beliefs with Christian beliefs waters down Christian faith. It leads to confusion and a lack of assurance that through Jesus, and only Jesus, we are assured of eternal life. In turn, Tanzanian Christians help us to understand how to be joyous in the midst of suffering.

Be encouraged that CMS makes it possible for Australians to go into many places in the world for long periods of time with the sole purpose of spreading the gospel of Jesus, and building and strengthening God’s church and his body of believers. But don’t be deceived and lulled into thinking this only happens overseas. It happens in your home town, in your family, in your workplace and in your own church. We know the rhythm of Australian life, culturally and spiritually. We know Australians need to know God and they need to be in a relationship with him.

We don’t have a mission but the great commission from Jesus himself (Matthew 28:18-20).

Praise God that he has set apart people like the Boyes for long-term cross-cultural mission. Pray for them and other CMS workers as they navigate the real and spiritual dual carriageways in their mission location.