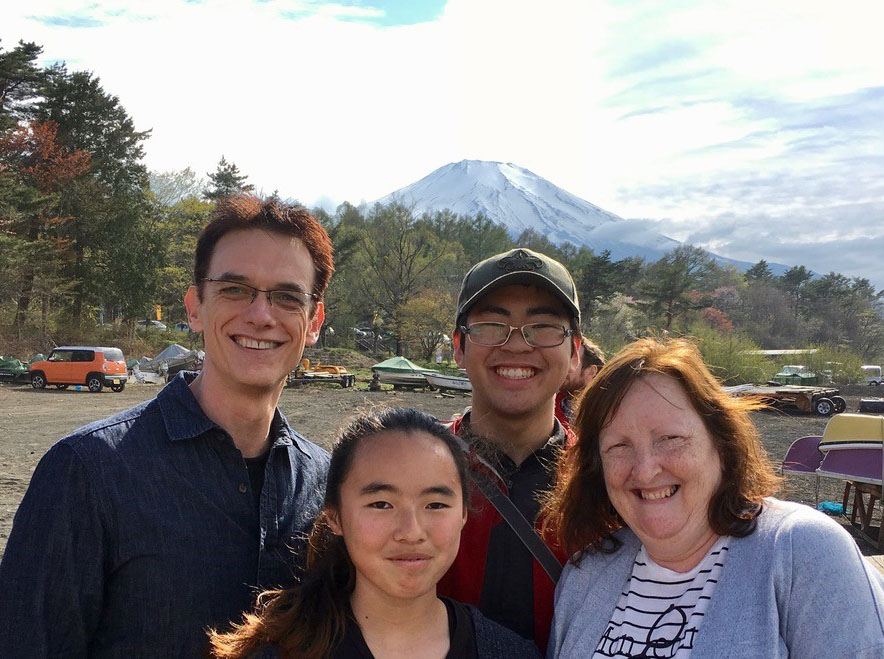 The Parsons family with Mount Fuji in the background.

Steven and Sandra Parsons have lived in Japan for 21 years, serving with CMS since 2007, and yet they still find themselves learning new aspects of Japanese culture every day. CMS talked with Steven to find out why learning the culture is a lifelong process and how God is using their status as foreigners to advance his gospel. Story by Amanda Jeavons.

After more than two decades living in Japan, Steven definitely has a better understanding of the culture than when he and Sandra first arrived in 1996. From taking off his shoes to putting chopsticks in the right place, different practices which were at first difficult and foreign have now become natural.

“It’s definitely easier than what it was. I bow when I talk on the phone now like Japanese people do” said Steven. “And there are many more times when you apologise here than in Australia – I think I’ve worked that out now.”

“Once when I was in Australia, I wasn’t looking at the person when I was talking about a difficult topic and they picked me up on it. But in Japan, you don’t look at people in those times.”

However, despite these accomplishments, Steven still faces the daily challenge of learning the intricacies of Japanese culture. Nor does he anticipate that it will ever end.

“There are still surprises. You can pick up bits and pieces but it doesn’t necessarily mean you fully understand it,” he said. “In your own culture, you pick up many things when you’re younger. Your parents are doing it and you see it all around you. If you’re not brought up in a culture, there are so many things you don’t ever really understand.”

He spoke about a recent example where his son, Joshua, was riding his bicycle and ran into a boy running across the street.

“Straight away it came into our minds to take a present to the family – that’s something we’ve learnt here. But what do you actually say? What are the right words? That’s something we felt a bit inadequate in,” he said.

Steven and Sandra were advised to take sweets to the mother and a toy for the child. They were also told a couple of times by the police to phone the mother as updates about the boy’s injury came through.

“That’s the first time we’ve experienced that situation in 21 years,” said Steven. “It’s incredibly confusing and scary in a way, because you’re not sure if you’re doing and saying the right thing at the right time.”

“And I’m convinced that we’ll never get it down pat,” he added. “Culture is one of the stressors that is always there. The deeper we get, the more perplexed we are. There’s always something that surprises us and I put it down to the fact that we didn’t grow up here.”

“We want to be where God wants us to be”

Though life in a foreign culture has its challenges, Steven finds comfort and assurance in knowing that God is in control of every situation.

“God takes us in and out of different responsibilities and roles, and they come with different joys and challenges,” he said. “Although there are all the cultural issues and struggles that you wouldn’t have in your own country, God’s in control of that. It’s all part of his plan.”

There are also many benefits for the gospel to be found in being a foreigner in Japan.

“It’s definitely a lot easier for a foreigner to talk to a Japanese person about God, especially with evangelism – there are so many cultural issues you can get away with. There’s already that expectation that foreigners are different and can’t get it, and God uses that in amazing ways.”

For however long the future holds, the Parsons will continue to rest in the assurance that being in Japan is what God wants for them.

“I believe God has called us to Japan and we don’t know when that’s going to stop,” said Steven. “If it’s hard then it just becomes the new normal and God is in that also. What really matters is doing what he wants. We want to be where God wants us to be. Ultimately it’s for the benefit of seeing the world come to know Jesus, no matter where we are geographically.”

Pray for missionaries as they seek to learn and adapt to the cultures they are living in. Pray that God would use their status as foreigners to reach more people with his word.