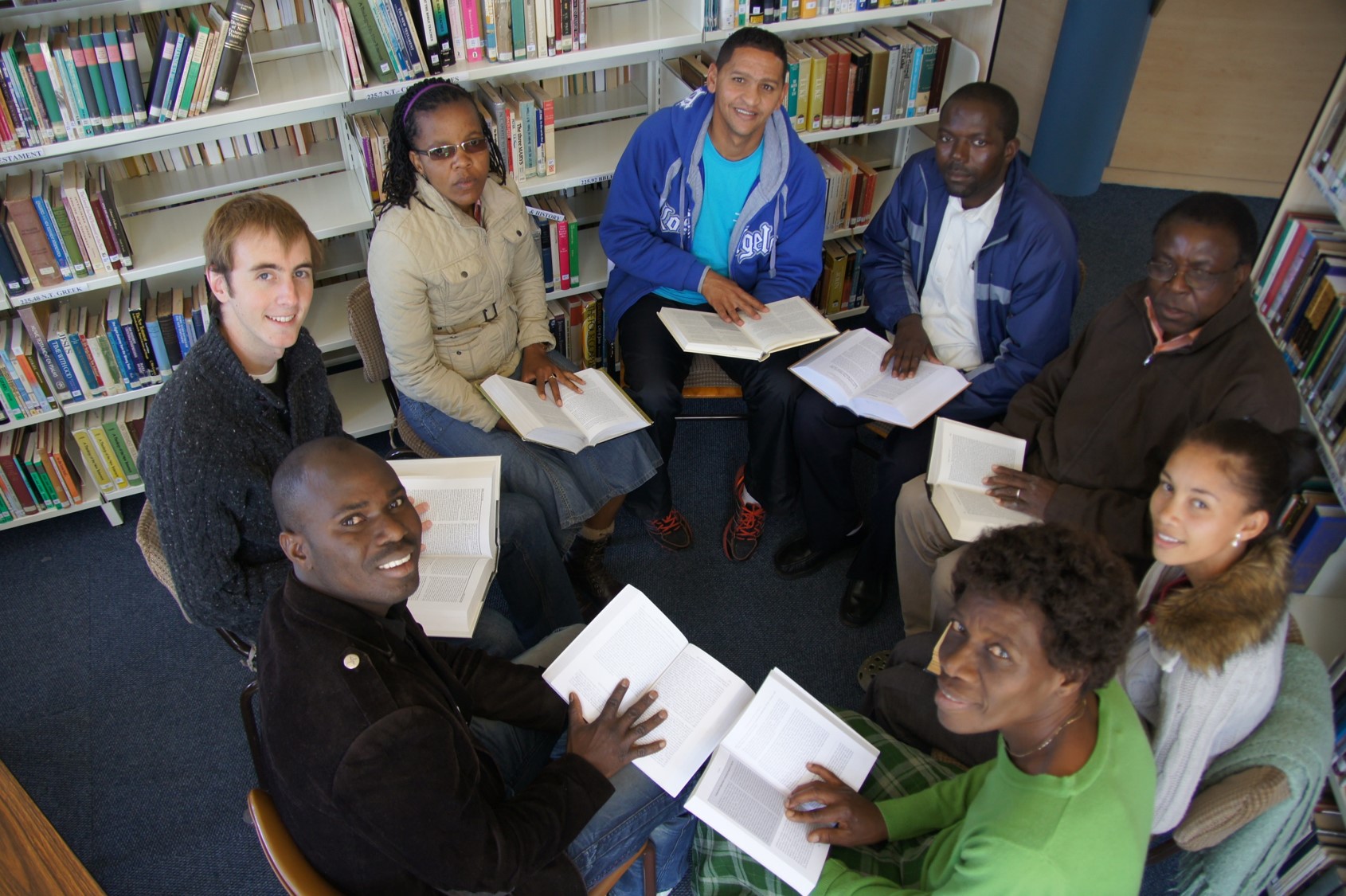 NETS students in the library.

Namibia Evangelical Theological Seminary (NETS) has long been a beacon of hope in a country facing many social and spiritual challenges. CMS missionaries who have served at NETS describe the crucial role it plays in building the local Church. Compiled by David Greeff*, with input from Mike Roe, Simon Gillham and Hugh Prentice.

Earlier this year, a prophet from Malawi visited Namibia with a prosperity message. He attracted a capacity crowd. Despite their poverty, many people reportedly paid $1,000 Namibian (AU$100) to attend. (One person even paid $100,000 to be seated next to him!) This example illustrates how influential the prosperity gospel has become in Namibia.

Prosperity teaching holds such appeal because the vast majority of Namibians live in significant poverty, with good health care being out of their economic reach. A plethora of other social issues are also common both inside and outside the Church: gender-based violence, alcohol abuse, a horrendously-high suicide rate, and a phenomenal road toll (due to a disregard for road rules).

A beacon of hope

In this context, there is a pressing need for solid Bible teaching to equip Christian leaders to teach the gospel faithfully. NETS, the only evangelical Bible college in Namibia, has played a vital role for 26 years in providing sound biblical teaching and ministry training for Namibia and the wider region. Based in the capital city of Windhoek, NETS was formed in 1991 when two small theological colleges merged.

CMS Australia began sending missionaries to support NETS 15 years ago, recognising the strategic role the college played in strengthening the Namibian Church. The first CMS missionary at NETS, Hugh Prentice, and subsequent CMS missionaries identified several limiting factors preventing local Christians from studying at the NETS, which they worked with the college to address.

Many Namibians live in rural areas, and the cost of residential full-time study is out of their reach. To increase the accessibility of its program, NETS developed ‘distance’ courses, which staff members first began to run in local prisons. Enrolments in these courses grew rapidly, and so the NETS Department of Distance Education (DDE) was created. In 2006, CMS missionary David Greeff was appointed to support DDE, based with his family in the far north of Namibia. An e-learning platform was eventually launched by David in 2014, enabling students to complete their theological certificate remotely. Today, the DDE continues to expand, and now employs seven remotely-based tutors, all of whom are Namibian.

2. The problem of language

“One of the main challenges of theological education in Namibia was that no student had English as a first language. Most struggled to read and write at an academic level,” says CMS missionary Simon Gillham (who served at NETS with his family from 2008 to 2015). To help solve this problem, Simon – who served as Acting Principal of NETS for three years – worked with NETS staff to alter the curriculum, allowing students more time to adjust to study and complete their qualification. Margie Gillham also assisted students by teaching English.

3. The cost of study

Many local Christians were being prevented from full-time biblical training because it was too expensive. “Significant subsidies were needed to maintain a model of tertiary education offered by NETS,” says Simon. So, under his leadership, NETS developed alternative income streams, including building income-generating accommodation, to support staff salaries.

4. A divide between local churches

The Namibian Church landscape is highly divided, and denominations are suspicious of one another. As an independent college, NETS was labelled by some as too traditional, or too Pentecostal, or too evangelical. The NETS team (under Simon’s leadership, together with other missionaries and Namibian staff) worked hard to engage with church leaders from different denominations and create strategic partnerships. This has resulted in an increase in student numbers over the last few years.

5. A lack of Namibian teaching staff

NETS had struggled to find Namibian staff who were sufficiently qualified to teach at degree level and who were able to teach long term. In response to this ongoing issue, NETS leadership opened up junior staff positions and began offering teaching positions to NETS graduates. Junior staff are carefully mentored and trained, while they undertake postgraduate study (through NETS).

Today, there are more Namibian faculty and staff at NETS, many of whom studied at the college themselves. CMS missionary Mike Roe attributes the success of the college to the integration between local and international staff. Mike began teaching theology and ministry subjects at NETS last year (while his wife Karen teaches academic English). He says: “[Serving on] the international faculty represents one practical way in which foreign churches, who are blessed with resources and good opportunities for ministry and training, can come alongside Namibian churches.”

However, Mike stresses that NETS actively seeks to appoint as many Namibian faculty and staff as possible, and “the goal is to help raise up local leaders … to equip Namibian saints for service”. Yet it is a long and costly process to train local faculty with postgraduate qualifications. In the meantime, it is vitally important that organisations such as CMS continue to send missionaries to the college. In this way, NETS will continue to be a place where gospel unity is forged; where God’s word is taught faithfully; and, through its graduates, be the means by which God’s kingdom is being built up in this troubled country.

You can play a part in enabling local Christians to study at NETS, and become fully equipped to teach the Bible in Namibia. To give a gift that will changes lives visit cms.org.au/give.

*David, with his family, served at NETS for over 10 years, from 2005 to 2016. David is currently working part-time for the Queensland with Northern NSW Branch, and will take up the position of General Secretary for CMS WA later this year.