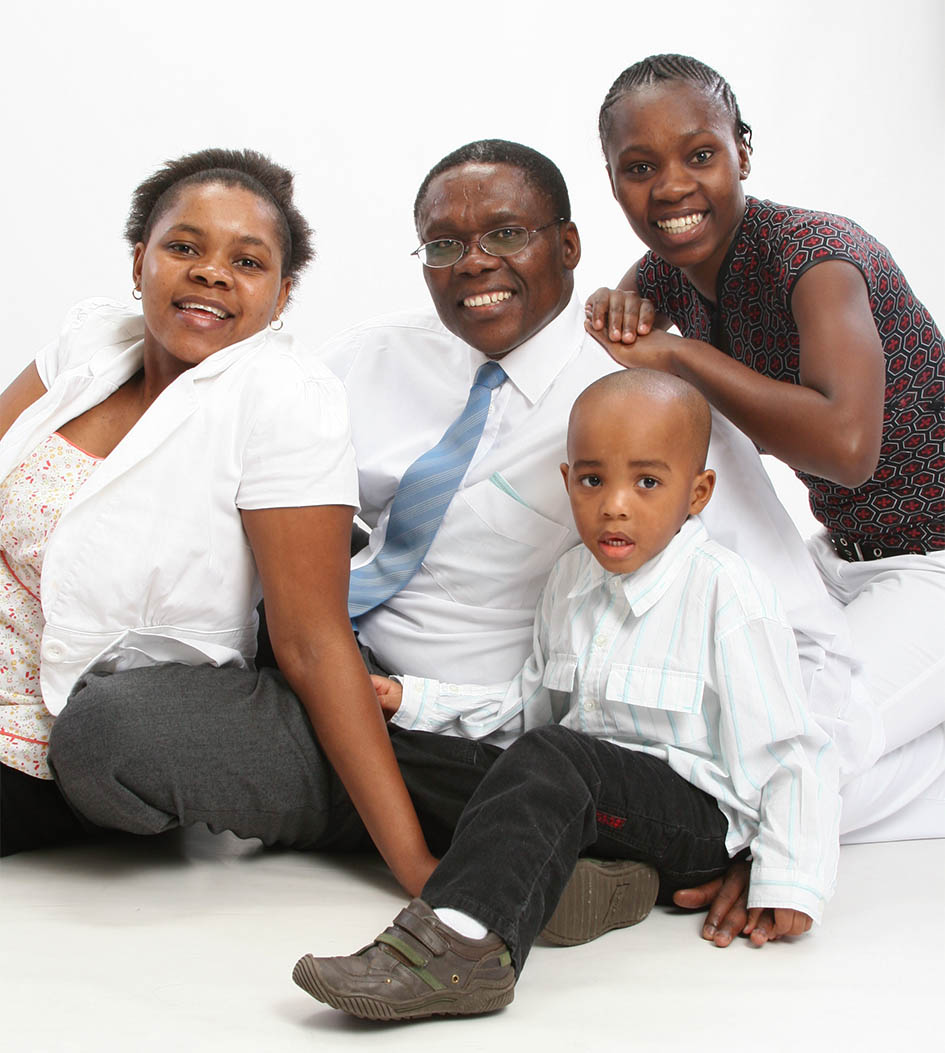 Sipho with his wife Lungi (far left) and children, Pearl and Lwethu.

Sipho Mfusi attended church for four decades, but never once heard the gospel of salvation by grace. He shares his story of a life transformed by the gospel and through Bible training at George Whitefield College in South Africa, where CMS missionaries Nathan and Diane Lovell* serve.

I grew up in a rural village, with no clean water, sanitation or electricity. I was an active member of the Zionist Church, the largest African Traditional Religion (ATR) in South Africa (SA). The church emphasises good works to find favour with God and strictly follows Old Testament dietary, moral and ceremonial laws.

My real passion in life was to become a professional soccer player for the top SA club – Kaizer Chiefs (KC). I found meaning, purpose, satisfaction and fulfilment in soccer. Yet each Sunday I habitually attended church and helped the needy, hoping that God would return the favour one day when I needed him.

However, when my wife was diagnosed with breast cancer, I realised I had the wrong perception about God. In despair, I fasted, prayed and consulted traditional healers, but her condition deteriorated. She died in 2002, aged 36. I can’t put into words the frustration, anger and disappointment that God had paid no attention to my good works. “If he is so powerful and all-knowing, why isn’t he helping me?” I asked myself.

Two years later, I remarried – to my now current wife, Lungi. Because of my age, all my hopes to play for KC were dashed, so I resolved to work hard and climb the corporate ladder. It paid off in 2004, when my employer relocated us to Australia to work with Qantas Airways in Sydney.

At this point, I had completely rejected the Church. On Sundays, I enjoyed drinking beer and playing soccer at the beach. I dropped Lungi and my son off at the nearby church and would pick them up later. But, still a devout Zionist, Lungi kept begging and pleading with me to go to church with her. I finally succumbed, and we visited a small church near our apartment block.

After a warm welcome and singing, we heard an expository sermon for the first time. It was based on the Ten Commandments. The preacher emphasised our need for the Saviour, Jesus, because it is impossible to keep and fully obey these laws in our own strength.

For over four decades attending church, I had never heard such a message. So, I began to examine these claims by reading the Bible daily and discussed it for hours with a church friend. Two years later, my wife and I were convicted of our sin and decided to put our trust in Christ for salvation and forgiveness.

We then felt burdened to share this good news with our own people back home in South Africa. After a three-year stint in the United States for work, I resigned and returned to South Africa to pursue theological training at George Whitefield College (GWC) in 2011.

Since graduating from GWC with a Bachelor of Theology in December 2013, Lungi and I have been working amongst Zionists in South Africa on a full-time basis. We run a church plant and a Bible Club for kids aged 6–13, the majority of whom are from the Zionist Church. Lungi also teaches Sunday school, while I am involved in preaching and translating Christian resources into the Zulu language. Nothing gives me greater joy than the anticipation of what else God has planned for us in the future.

I have a portrait of our family in our living room, with words from a book written by David Cook – words that I have made my own: “When I reach the end of my days a moment or two from now, I want to look back on something more meaningful than the pursuit of houses, stocks and bonds. I will consider my earthly existence to have been wasted, unless I can recall a loving family, a consistent attempt to serve my Saviour and a meaningful investment into the lives of people. Nothing else makes much sense.”

Pray that God will use Sipho and Lungi to bring many South Africans to a true understanding of the gospel of grace found in Jesus Christ.

* Nathan is Head of Biblical Studies and teaches Old Testament at George Whitefield College, while Diane ministers to mums at the college and in the community.