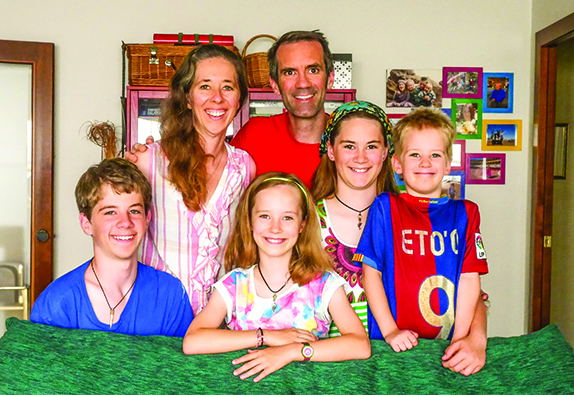 We arrived in Spain in 2008 to work with the Spanish Anglican Church. This indigenous church was founded by Spaniards in the 19th century and is part of the Anglican Communion. Andrew is the minister of the only Spanish Anglican Church in Barcelona. Before our arrival, this church had been without a minister for the previous 16 years. So, when we arrived there were only five remaining members. Over the last eight years we have devoted time to learning about the local culture and two languages – Spanish and Catalan – in order to build deep relationships and begin to re-establish the church (in the midst of normal family life: raising four kids, cooking, cleaning and so on!).

In this context, we have learnt a number of personal lessons about prayer. One of the questions we prayed about is: who are we, God? You see, we did not put up our hands to be church-planters, but that’s the situation in which we found ourselves. We thought we were coming to a small group of believers who wanted some pastoral care and direction, and that alongside them we would work for the gospel. But with such a tiny congregation remaining, this was not the case. We were disheartened. Could God really mean for us to be here when we didn’t feel like the right people for the job?

God’s answer to our prayer was, ‘Yes!’. He showed us in a number of ways that we should be here and that we were to persevere in his strength. This message came through reading the Bible (especially reflecting on Paul’s letters to Timothy), through financial provision, through unexpected conversations and through certain people who came to church. We could not ignore the evidence, regardless of what we thought about our abilities!

Another time of prayer that reminds us of God’s good provision was in the period before our second Home Assignment. About six months before we were due to leave for Australia, it became obvious that there was no one at church with the ability to continue the weekly meetings. It seemed we would need to stop the meetings for six months. We started to pray about this, and God answered our concerns in the form of two young men. The way they came to be with us could only be seen as God’s provision and they were able to maintain the meetings while we were away.

God has not always answered prayers as we expected. At one point there were very few Spanish-speakers at church, so we were asking God to help. But instead, he sent some English speakers! This seemed odd until we realised that he had also opened a way for us to do some more formal language study.

Of course there are long-term prayers that we continue to bring to God. Our kids all go to a local school, but we have not met anyone else at this school who goes to church. Everyone knows who we are and why we are here, but they are, politely, not interested. While God has not yet answered our long-term prayer to see families in our school respond to the good news of Jesus, we have seen him at work as we pray. This is evident through small comments that other parents make about our family. They can see that we have a hope that affects the way we live, and they are curious.

Over the years, and throughout all our prayer requests to God, we have been so encouraged by the fellowship in prayer with our long-term supporters in Australia. We never tire of hearing from supporters that they have been praying for issues mentioned in our prayer postcard.

The lessons learnt by praying for our work here in Spain have affected our own personal prayer lives. We now understand prayer not to be something that we do at certain points of the day, or with certain lists, although we do both of these. Prayer is walking with God, all the time. Paul’s command to “pray continually” (1 Thessalonians 5: 17) has really started to make sense as we look to see God respond to us. In many ways we have realised how much we are loved by our heavenly Father as we have given more time and energy to prayer. He really does hold the universe in his hands and he will provide the good things that we need. We have grown in our conviction that a life with God, a life that is lived through prayer, is the only one that makes sense.