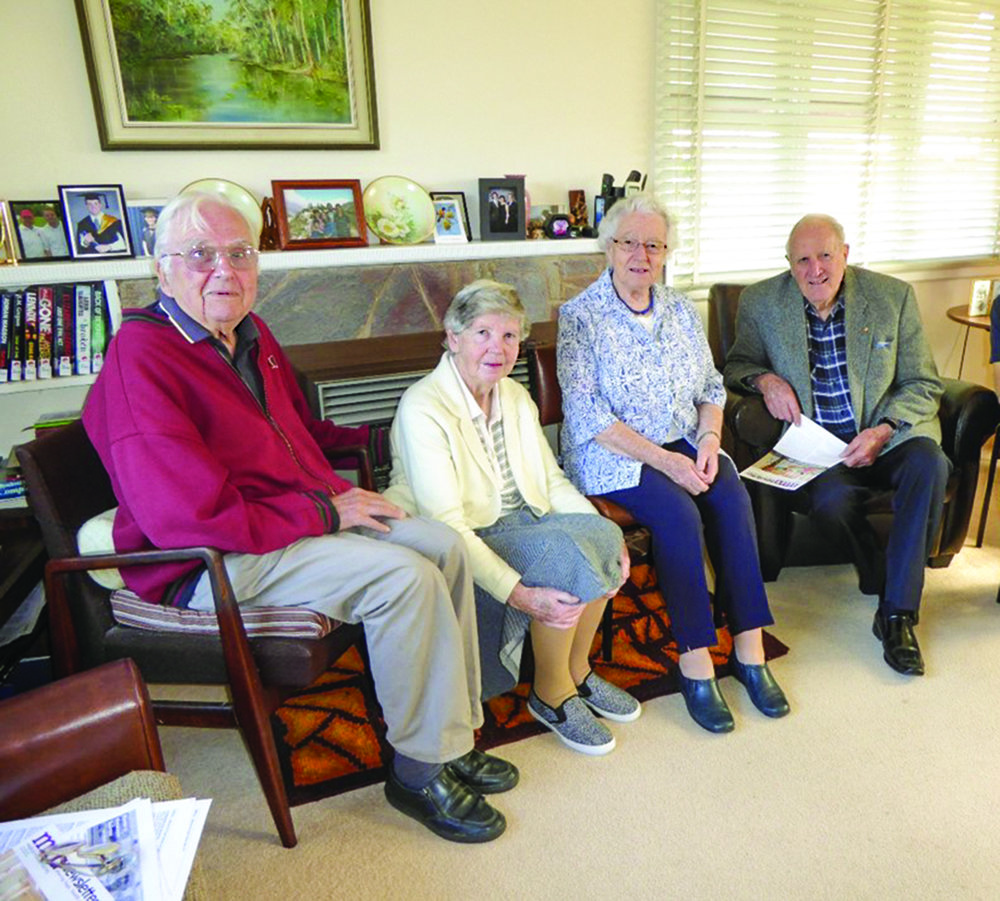 Members of the Melbourne Nepal Prayer Group meeting together.

Since the 1960s, a faithful group of Christians has been meeting monthly in Melbourne to pray for the spread of the gospel in Nepal and, especially, for CMS missionaries working there. Elisabeth Carter reports on the passionate commitment to prayer of the Melbourne Nepal Prayer Group.

In the 1960s, Peter and Anne Oldland moved from Scotland to Australia. While living in Scotland, their church had strong connections with the Nepal Evangelistic Band (now INF), and the Oldlands were involved in a home prayer group for Nepal.

When they moved to Australia, Peter and Anne remained convinced of the value of regular prayer for specific people in specific countries. So, they contacted CMS and asked if they could share the details of any missionaries who could be supported through a prayer group. CMS suggested someone who was going to Nepal.

So, Peter and Anne set up a monthly meeting to support this missionary and others they came to hear of serving the Lord in Nepal. Soon their group grew, with the addition of members of another group begun by a missionary on Home Assignment, Howard Barclay.

From Howard’s group came Jessie Lawlor, who began compiling monthly Nepal Newsletters from letters written by missionaries on the field, in order to fuel the prayers of the group.

Since then, the group has met monthly in the home of the Oldlands, with over 520 newsletters distributed in the past 45 years! Jessie recently passed away to be with the Lord, but her legacy continues as the newsletters go out to over 60 people to be used by prayer groups across Australia.

Peter and Anne have never actually been to Nepal. But they knew that through prayer, they could “do as much for foreign missions as those on the field”. So their group has continued to meet every month since the late 1960s, only missing one meeting in all those years.

A CMS missionary who has been working in Nepal shares: “We have no idea what the totality of the gospel significance of their prayers will be until we reach eternity. But we can be sure that God has honoured their amazing ministry, and it will have been hugely significant.”

We do already know that when the Melbourne Nepal Prayer Group began in the late 1960s, there were only a few hundred Christians in Nepal. Today, 1.4% of the Nepalese population identify as Christian! We believe the number continues to grow, despite some opposition and difficulties.

The new constitution proposes laws to prevent people from sharing their faith and can lead to imprisonment for five years. While these laws have not been finalised, it is an ongoing concern.

Praise God for those who have faithfully prayed for many decades for gospel work in Nepal, and pray that God would continue to bring extraordinary growth to the Nepalese Church, despite pressure on Christians not to evangelise.

As this story demonstrates, the prayer of Christians is powerful and effective! Pray for the work of CMS missionaries around the world, that they would spread the gospel message to people from all nations. If you’d like some more specific points, click here.