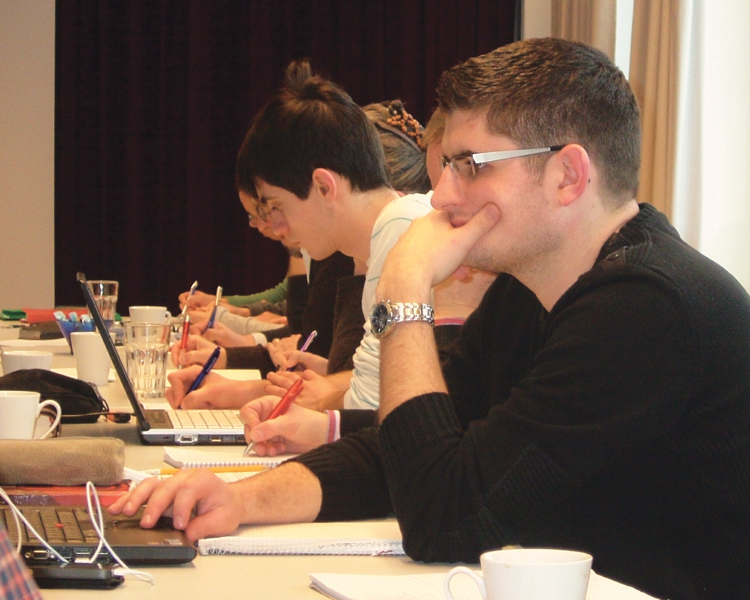 CMS missionaries Mike and Caroline Clark have been serving at Martin Bucer Seminary in Germany for the past four years. Despite significant difficulties, Mike reports that God’s word has been moving in remarkable ways.

As an old man, chained up and languishing in prison, abandoned by his friends and facing execution, the Apostle Paul must have felt enormous temptation to become discouraged or just chuck it all in. After all, as the greatest missionary of all time he had some pretty impressive laurels to lean back on. Paul had run the race and knew the weight of glory awaiting him in Heaven. But he didn’t rest, choosing instead to continue to suffer for the sake of the gospel, for the sake of the elect. Paul was convinced that although he was physically bound, God’s living and active word was most certainly not and would surely continue to do its life-bringing work, even in the midst of these extreme difficulties.

Four years ago, God brought us to Munich to begin a new work raising up gospel workers for the harvest. Our aim was to establish and run a new Bible school – a branch of the Martin Bucer Seminary (MBS) – for the state of Bavaria (Germany’s largest state), which until then had no evangelical Bible seminary for its 13 million inhabitants. We didn’t know how it was going to go. Other than my dodgy schoolboy Deutsch, neither Caroline nor I spoke the language or knew any locals. Frankly, we were daunted by the prospect of helping our four children integrate into one of the toughest school systems in the world. But we had been convicted of the city’s need through German friends, and the Lord had opened a door to ministry there. So we went, trusting in his faithful provision for everything we needed.

Our experiences have certainly not been like those faced by the Apostle Paul, and yet we do find many aspects of our new life challenging. In addition to the normal stresses we would have faced in Australia (dealing with our own sinful hearts and the pressures of raising a family), we’ve had to learn to deal with a whole range of new challenges specific to our new context.

If anything, schooling has been even harder than we imagined. We’ve struggled with health issues. We’ve faced conflict from surprising quarters at times. We miss greatly those we have left behind. We often feel that people just don’t ‘get’ us over here, and we have shed tears of frustration and sadness over seemingly immoveable barriers of culture and tradition. All of which means that we often feel weak, inadequate, frustrated, disappointed and ‘bound’ or constrained.

And yet, again and again, we have seen that God’s word is not chained and has been remarkably active. Over the years:

And yet MBS is really just one aspect of our ministry in this place.

At the church we attend (the Free Evangelical Church in Munich), Caroline has opportunities each week to read the Bible with the wives of two of our Assistant Ministers. She also has the chance to share with seven (not-yet) believers whom she is teaching English and to build friendships in the school community. And it has been wonderful to witness our kids inviting their friends to youth group on Friday evenings.

Perhaps most wonderfully, in December last year two young Christian Afghani men, Roya and Nasser, turned up one day at our church from a refugee home 1.5 hours away. I asked if they wanted to read Mark’s Gospel with me and a couple of others. Over the past months, it has been a joy to witness their hunger to learn and to hear about their efforts to share the gospel with others, despite threats of violence. These men have suffered horrifically at the hands of the Taliban (Nasser’s family was murdered and his back was broken) and they still continue to suffer persecution in their refugee homes in Germany. Yet they cling to Christ and are bearing fruit.

Mohommad, who lives in the same home as Roya, has also recently put his faith in Jesus as his Lord and Saviour, despite threats of serious violence from his housemates and of divorce from his wife. And we have been joined recently by Javed and Hamid (also from a Muslim background), who have also professed faith in Jesus, and Wahid and Mohammad-Raza (both from Iran), who have found Christ in the last few years.

While we are struggling to keep pace with the speed of all these developments and often feel like we can’t do enough to meet the needs of these refugees, we can pray for and share God’s word with these men. For, as Roya says, “Mr Mike, we just want the Bible!”

Show your care to the Clarks or to your church’s link missionaries. Why not send an email or letter of encouragement to show they are in your thoughts and prayers?

One response to “God’s word unchained”