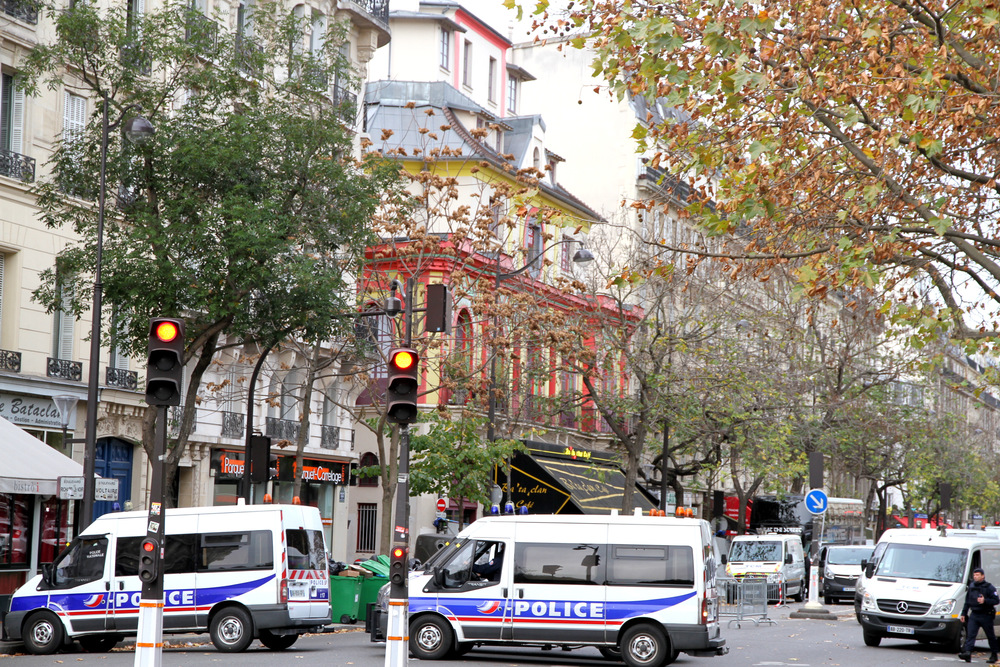 Police at the Bataclan Theatre, Paris on 14 November.

Over 120 people are confirmed to have died and more than 300 injured after coordinated terror attacks in Paris on Friday 13 November. The attacks took place at the Bataclan Theatre and multiple Paris restaurants and there were explosions at the Stade de France, where France was playing a friendly soccer match with Germany.

CMS missionaries Kelly Landrigan and Josh and Susannah Apieczonek are currently serving in Paris. We give thanks that they are safe and out of danger. Josh Apieczonek reflects on his experience of the events and how we can be praying in response:

“Thanks to all those who have sent us emails of concern and prayer. We are ok though we are shocked, saddened and grieving with the people of Paris after the attacks on Friday night. We thought we’d describe our night for you so you know how we feel and what we’re praying for…

I (Josh) was at the football game at the Stade de France on Friday night with some friends from language school. The security at Gate R was very strict with a heavy pat down for which I was very thankful for an hour later. Midway through the game we heard and felt two enormous booms outside that reverberated through the stadium. They were far louder than any firecracker I had ever heard but the game continued. We didn’t know this at the time but one of the terrorists had tried to get through the security at Gate J and had been stopped and had set off his bomb. There was no request to evacuate and the game played on until the end though news began to filter through the crowd that there had been explosions.

The stadium announcers told the crowd to avoid Gate J due to an incident. People had been on edge and as we left the stadium either the bomb scene or some other incident started a panic. We were descending the stairs and suddenly saw wave upon wave of hundreds of people fleeing back towards the stadium. Everyone assumed there was some sort of attack by gunmen connected to the explosions. It was startling seeing hysteria on such a large scale. People were being knocked to the ground and the crowd surged back into the stadium and spilled over onto the field.

I’m thankful that our CMS training at St Andrew’s Hall included some sessions on dangerous situations (not that we thought we would need them in Paris) and though I didn’t have time to consult the “what to do in a potential stampede” section I did feel strangely calm having talked through some pretty sketchy situations with wise teachers. Having said that, “Calme-toi! Calme-toi!” didn’t seem to make much impact though that could have been my woeful accent. That alarm was my first taste of the fruits of the terrorists work and it was to stay with me for the next couple of hours.

The rush of the crowd petered out and everyone wandered round trying to find their friends and family. A few random security people were running around or barking orders at people. We nervously made our way towards the train station passing shoes, boots, bags and flags discarded in the earlier panic. We heard sirens and came across areas with police tape, police cars and ambulances with blue lights flashing. Officers with assault rifles and dogs herded the throng of people through narrow areas but rather than feeling secure we felt more trapped, exposed and uneasy. People were jumpy at being squashed together, both in fear of another stampede and at being a large stationary target.

We got on the train with some relief but it only went one stop before an announcement came over the loudspeakers that the train was cancelled, and that we needed to stay calm but evacuate the station quickly. We all surged off the train, raced up the stairs and were hurried along by security guards shouting “Allez”. We finally got out into the crisp night air at Gare du Nord and wondered what was coming next and what we should do.

Susannah, who’d stayed home with the kids, had heard on the news about the bombs at the stadium and had tried calling to make sure I was ok, but my phone hadn’t been working due to the crowded network. She spent a very frightened 15 minutes seeing news footage of bombs, shootings and a hostage situation before finally hearing via someone else that I was ok. Eventually I was able to send her a message but my phone battery died soon after, leaving her to sit and wait nervously at home.

At this stage we knew about the bombs and were hearing snippets of information about the 4 or 5 other scenes including the hostage situation. We kept seeing flashing blue lights and hearing sirens and we weren’t sure whether the terrorists were on the move or not. We would pass people in the street or in bars and restaurants peering out; everyone was nervy, jumpy and constantly looking in every direction.

When we did get more information we realised we were walking in the direction of the other scenes of terrorist activity and adjusted our walk around them. We eventually crossed the river and a friend was able to drive in, pick us all up and take us home at about 3am in the morning.

We spent the rest of the weekend reflecting on the devastating loss that so many families in Paris are experiencing and just praying for comfort and hope for them.

As I’ve described my experiences and feelings it’s become clear to me how effective the terrorist’s tactics are at sowing tension, fear, unease and anxiety. Everyone in the city was and is on heightened alert and is nervous that any loud noise could be the start of some new fearful event. I’ve just seen on the Internet a false alarm that caused people at a memorial to panic and run. The tactics of the terrorists in choosing to target not the glitzy Champs-Elysees Paris but normal rock-concert-football-match-average-restaurants Paris is a clear and effective way to sow terror in the heart of the average Parisian.

People are observing that we are more shocked and paying more attention to this terrorist attack, when we often don’t register the violence and terror people in other parts of the world experience every day. We too are saddened by this, but aware also that this event was shocking exactly because that sort of thing doesn’t happen here – doesn’t happen in cities like Paris – doesn’t happen to people we know.

It’s a blessing to live in the peaceful Western world, and it’s quite different, as many of our CMS missionaries know, to living in parts of the world where life is much more fragile and dangerous. It’s a blessing to be safe but our society gets deluded into thinking that humanity is good and in control, that we are self-reliant, that we don’t need to think much about what happens after death and that we don’t need God.

But of course we aren’t in control, life is fragile, there is evil in the world that we can’t bring ultimate justice to. I’m glad I know the God who will bring justice to the terrorists and who provides hope and comfort for all who call on the name of Jesus. Please join with us in praying for those throughout the world undergoing unseen suffering and pain, and for the shocked Western world coming to terms with the violence and death in their midst, that they would look to our great and gracious Saviour who knows our pain and conquers sin, evil and death for us.”